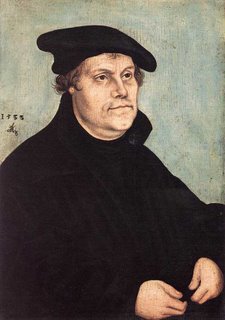 Martin Luther was charged with heresy for his new found view of justification by faith alone. He was urged to recant but refused. After the Diet of Worms in 1521, Charles V issued a letter referring to Luther as "that notorious heretic."

The charge of heresy was a matter of perspective. Luther's conscience was bound by the Word of God. He needed to be refuted out of Scripture and not by popes and councils who had often erred. It was Scripture that would be the highest court of appeal in this matter. Was Luther a heretic at the bar of Scripture?

Heresy is relative to our source and norm of theology. That is the reason why the Roman Catholic Church of the day condemned Luther for heresy. But the right to judge heresy is reserved to Scripture alone.

The following quote from Luther is wise advise on one necessary aspect of responding to heresy. Even though heresies distress the Church their existence can have positive results:

"If heresies and offenses come, Christendom will only profit thereby, for they make Christians to read diligently the Holy Writ and ponder the same with industry. … Thus through heretics and offenses we are kept alert and stouthearted and amid wrangles and battles understand God's word better than before."
Posted by Martin Downes at 7:55 AM