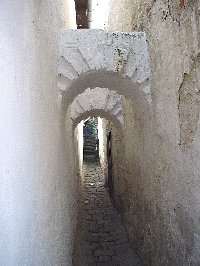 Accusing someone of being narrow in their theology is a great rhetorical device.

It is guaranteed to cast your opponent in a bad light. Describing your opponent's theology as narrow instantly makes it, and them, appear extreme and uncharitable. Even good arguments , once they are claimed to be narrow-minded, are looked upon with less favour. The reason for this is obvious. Narrowness is associated with intolerance and being ungenerous. And these, of course, are character traits that we generally wish to shed, not reinforce. Does the verbal mud stick?

It may do. We could of course be narrow about the wrong things. We could be Baptists that exclude from the Lord's table gospel believing Presbyterians. Or we could be charismatics who regard those who have not spoken in tongues as therefore not Spirit-filled believers.

But painting an opponent as narrow minded, of itself, says nothing about the rightness or wrong headedness of their beliefs. And it doesn't communicate anything intelligent about the value and appropriateness of those beliefs, or the character of the person believing them. Of itself it predisposes us to consider that person to be bigoted. The irony of it is that the one making the accusation may well be the intolerant narrow-minded party.

But accusation of narrowness, as I said, is simply great rhetoric. The word itself stirs up the desire in us to be dismissive, and particularly to be dismissive of the intellectual value of an opposing position. But those "narrow views" may well be definite thought out convictions, and definite convictions about things that really matter. And definite convictions that are logically incompatible with other beliefs, and vice versa. Narrowness is an epithet that tells us nothing about the value of someone's beliefs, nor, for the record, their character.