The Usual Suspects: No. 1 The Sincerely Ignorant 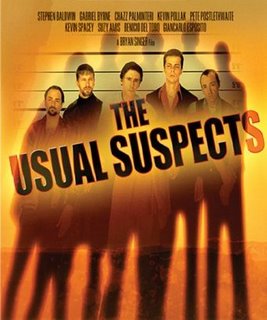 What kind of person could be described as sincerely ignorant?

Bob Sheehan finds a clear example in the record of Acts with the arrival of Apollos in Ephesus. The text is as follows (Acts 18:24-28):

24Now a Jew named Apollos, a native of Alexandria, came to Ephesus. He was an eloquent man, competent in the Scriptures. 25He had been instructed in the way of the Lord. And being fervent in spirit,[c] he spoke and taught accurately the things concerning Jesus, though he knew only the baptism of John. 26He began to speak boldly in the synagogue, but when Priscilla and Aquila heard him, they took him and explained to him the way of God more accurately. 27And when he wished to cross to Achaia, the brothers encouraged him and wrote to the disciples to welcome him. When he arrived, he greatly helped those who through grace had believed, 28for he powerfully refuted the Jews in public, showing by the Scriptures that the Christ was Jesus.

Sheehan comments that "when Priscila and Aquilla heard him preach they recognised his sincerety within the limits of the knowledge that he had, but they knew that his gospel was incomplete. His error was not wilful perversion of the truth but an inadequate grasp of its fulness."

"if the apostolic approach to error had simply been a rule of thumb that all error was to be condemned and treated without any consideration of the pastoral care of the person in error, then Priscilla and Aquilla would no doubt have written Apollos off, but they did not. They issued no public challenge to him nor did they condemn him."


What does this tell us about Apollos? He is commended for his thorough knowledge, as far as it went. Sheehan has some helpful words about the teachable spirit of Apollos:

"This whole incident required a great deal of humility...he was always willing to learn more about the truth. There was no arrogance nor rebellion, no hard heartedness, nor wilful perversity about him."

1. Discerning error does not end with evaluating doctrine but also includes taking a view of the person involved. Are they teachable? Are they in submission to Scripture and seeking to grow in their knowledge? Are they open to gentle correction? These questions are of critical importance. Of course they are not restricted to observations about others. Am I teachable? Open to correction? Submissive to Scripture?

Perhaps what was most remarkable was not the fact that Apollos was ignorant, but that as someone with a public teaching ministry he was being helped and corrected by others with greater, clearer, and fuller knowledge. The text has the sound of the rustling pages of an open Bible and not that of clashing swords.

2. Damage can be done to those like Apollos by mistaking their ignorance for unbelief and treating them too severely as a result. How can we tell the difference between the two? By asking the questions in point 1. above.

3. Great good can be done for the church and the proclamation of the gospel by taking the approach of Priscilla and Aquilla. For example, in 1929 Dr. Martyn Lloyd-Jones was preaching in a church in South Wales. At the close of the service someone remarked that the cross has little place in his message. Lloyd-Jones went off to read James Denney and P. T. Forsyth works on the atonement. By his own, later, admission his preaching had been imbalanced, stressing regeneration but insufficiently dealing with the atonement and justification. Because of that conversation his ministry changed for the good.