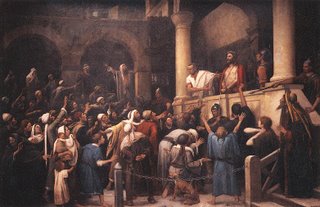 Consider the following from John Owen:

"I no way doubt but that many men do receive more grace from God than they understand or will own, and have a greater efficacy of it in them than they will believe. Men may be really saved by that grace which doctrinally they do deny; and they may be justified by the imputation of that righteousness which, in opinion, they deny to be imputed: for the faith of it is included in that general assent which they give unto the truth of the gospel, and such an adherence unto Christ may ensue thereon, as that their mistake of the way whereby they are saved by him shall not defraud them of a real interest therein.

And for my part, I must say, that notwithstanding all the disputes that I see and read about justification (some whereof are full of offence and scandal), I do not believe but that the authors of them (if they be not Socinians throughout, denying the whole merit and satisfaction of Christ) do really trust unto the mediation of Christ for the pardon of their sins and acceptance with God, and not unto the ir own works or obedience; nor will I believe to the contrary, until they expressly declare it."

There are boundaries to Owen's generosity.

Socinians are excluded since they are denying and seeking to destroy the "whole merit and satisfaction of Christ".

Those who are trusting in their own works or obedience are excluded. Owen has laboured to show in the previous section that the is only one justification and it is either by the law or the gospel.

Nonetheless his words are generous to those who he considers to be wrong in the way that they have thought about justification in their doctrine but who may yet be right before God (and thus saved by Christ's righteousness imputed to them, which is the only way of being saved) because, in reality, they really are trusting in Christ alone and not in their own works.