Heresy is the Way without Truth or Life 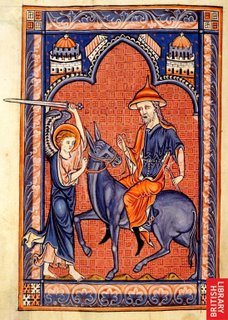 The way of the heretic follows two paths. They are not mutually exclusive options but they may be logically distinguished.

One way is to introduce a foreign element to Christian doctrine.

This alien invader then reshapes the content of the faith, often by given reinvented meaning to words. We see this at work in 1 Corinthians 15.

Another way is to follow a path of hermeneutical deviancy.

This is the failure to interpret the Bible rightly at the level of understanding and teaching the central saving truths. When this path is stubbornly followed, when those walking it drown out the voices of right guides, then it is not only heresy but the person on the road to departing from the faith is a heretic.

This hermeneutical deviancy leads to a rewrite of the faith, changing it into something new. And that is heresy.

Whichever path is taken the destination is the same. Temporally, the path leaves Christianity and becomes a new way, an improvement on the apostolic doctrine. Eternally, it leads to ruin, for how can a man be saved by a false gospel?

"Heresy chooses willfully to depart from the internal cohesion and fine dialectical balance of classic Christian teaching. Because heresy asserts severed, segmented fragments of religious truth in disconnection or imbalance, it lacks the wholeness, composure, and equanimity of the New Testament faith. It carves and slices the wholeness of faith into parts and then chooses or discards elements based on its own private preferences. Those fragments are often so disconnected that they lose all affinity with the wholeness of ancient Christian teaching. In isolation they become unrecognisable.

Heresy can thrive only where some legitimate dimension of faith is elevated out of proportion. Asserted asymmetrically, that dimension loses equilibrium and proposes itself as a new principle of interpretation for 'correcting' the whole pattern of Christian teaching."

Thomas Oden, The Rebirth of Orthodoxy, p.134
Posted by Martin Downes at 9:38 AM