Soon to be back in print: "Repentance" by John Colquhoun 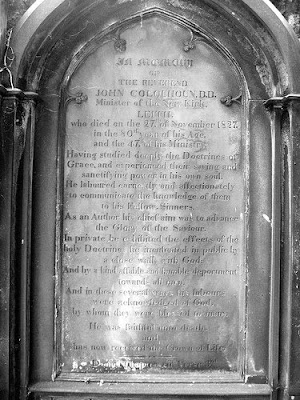 Whilst rummaging through our church library, looking for a book by Machen, I stumbled across John Colquhoun's Repentance.

The "Marrow men" were defenders and preachers of the offer of God's free grace in Christ to all sinners.

The book was first published in 1826, and published by the Banner of Truth in 1965. As I started reading through it I could not fathom why they let this little gem go out of print. Well the good news from Jonathan Watson at the Banner is that they will be republishing the book later this year.

Colquhoun wrote the following words about "evangelical" as opposed to natural or legal repentance:

It is a gracious principle and habit implanted in the soul by the Spirit of Christ, in the exercise of which a regenerate and believing sinner, deeply sensible of the exceeding sinfulness and just demerit of his innumerable sins is truly humbled and grieved before the Lord, on account of the sinfulness and hurtfulness of them.

He feels bitter remorse, unfeigned sorrow, and deep self-abhorrence for the aggravated transgressions of his life, and the deep depravity of his nature; chiefly, because by all his innumerable provocations he had dishonoured an infinitely holy and gracious God, transgressed a law which is "holy, just and good," and defiled, deformed and even destroyed his own precious soul.

This godly sorrow for sin and this holy abhorrence of it arise from a spiritual discovery of pardoning mercy with God in Christ, and from the exercise of trusting in his mercy.

And these feelings and exercises are always accompanied by an unfeigned love of universal holiness, and by fixed resolutions and endeavours to turn from all inquity to God and to walk before him in newness of life.

Such, in general is the nature of that evangelical repentance, to the habit and exercise of which the Lord Jesus calls sinners who hear the Gospel.

Here is the inscription from Colquhoun's gravestone:

Having studied deeply the Doctrines of
Grace, and experienced their saving
and sanctifying power in his own soul.
He laboured earnestly and affectionately
to communicate the knowledge of them
to his Fellow Sinners.
As an Author his chief aim was to advance
the Glory of the Saviour.
In private he exhibited the effects of the
holy Doctrines he inculcated in public by
a close walk with God;
And by a kind affable and humble deportment
towards all men.
And in these several ways his labours
were acknowledged of God,
by whom they were blessed to many.
He was faithful unto death
and
has now received the Crown of Life.
Posted by Martin Downes at 4:10 PM

I have read this book and would highly recommend it to every sinner and true believer. A lot of our preachers of the doctrines of the grace of God are making repentance a work in order to secure salvation rather than as a result of salvation. This puts awakened sinners spinning around trying to repent enoung instead of believing in order to repent. I am afraid many are standing outside the wicket gate wanting to enter but are afraid. They will not enter because they listen to Satan that they have not repented enough and Christ will not accept them. This book counteracts this false doctrine and encourages sinners to believe and look to Christ in order to repent. I praise the Lord for getting this book in my hands. But for it, I would be on the outside looking in rather than trusting Christ, my Lord!

I believe this book is still available at bookroom@radiomissions.org