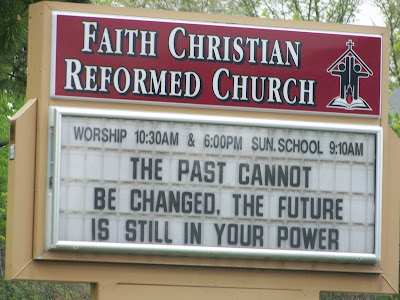 Back in the summer of 2001, when we lived in sunny Swansea, I read Jonathan Edwards' treatise on The Freedom of the Will (or as the full title has it, A Careful and Strict Inquiry into the modern prevailing notions of that Freedom of the Will which is supposed to be essential to moral agency, virtue and vice, reward and punishment, praise and blame).

As you can imagine it was a hard but rewarding read, plus I read it in the Banner of Truth edition and nearly lost my eyesight in the process.

Edwards has a brilliant section (XI) on "The Evidence of God's Certain Foreknowledge of the Volitions of Moral Agents." He has an interesting caveat before he builds his case from Scripture:

One would think it wholly needless to enter on such an argument with any that profess themselves Christians: but so it is; God's certain foreknowledge of the free acts of moral agents, is denied by some that pretend to believe the Scriptures to be the Word of God; and especially of late. I therefore shall consider the evidence of such a prescience in the Most High...

My first argument shall be taken from God's prediction of such events. Here I would, in the first place, lay down these two things as axioms.

Posted by Martin Downes at 4:40 PM

Hope you are reading and enjoying Edwards as much this morning as you were in 2001. Unless you lost your eyesight on the Banner edition, of course.

The thing I most appreciate about him is that (250 year old vocabulary and too long titles aside) he is intentionally NOT difficult. He was writing popular theology for everyone, for the church, of the very best kind. Applied, pertinent to the real issues at hand, easy short bullet points.

I still think Edwards is the best of us since the Reformation.