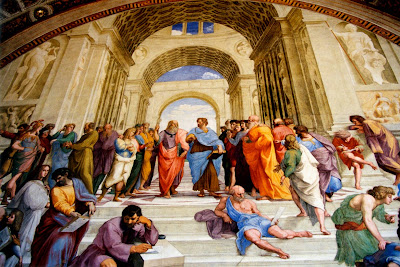 I will be adding some further posts on the correspondence between the open theist denial of God's exhaustive foreknowledge and that espoused by the heretical Socinians in the seventeenth century.

Robert Strimple, in his 1996 essay "What does God know?", demonstrated the striking similarities between the two, and is heavily footnoted by several authors. Gary L. W. Johnson had highlighted the Socinian roots of what would become openness theology a decade before Strimple's essay was published (WTJ, Fall 1986).

Open theists Clark Pinnock and John Sanders reacted strongly against this connection, and both see it as something of a smear campaign, an underhand tactic, and a false attempt at discrediting open theism through "guilt by association."

Pinnock wrote that "The hope is to dispose of openness theology by tying it to some known heresy...The fact is, open theists are trinitarian believers, which means the Socinian charge is wide of the mark." (Most Moved Mover, p. 107). This really misses the point. Socinus denied that God exhaustively knew the future. If God did know the future in this way then human freedom would be unacceptably jeopardised. This same move has been made by the open theists. The charge is on target.

Let me also at this point restate my argument from a previous post (which will form a part of a chapter on the relationship between open theism and Socinianism):

Rather than quote from Robert Strimple, Millard Erickson, John Frame, Roger Nicole (see his 1995 review of The Openness of God), Michael Horton, Ardel Caneday, Doug Wilson, or Richard Mayhue (to name several writers who have made the connection between open theism and Socinianism) have a read of this extract from the process philosopher Charles Hartshorne:

What follows is an item of Unitarian history that will be unfamiliar to many readers. Nearly four centuries ago, the Italian theologian Faustus Socinus criticized the traditional deification of Jesus of Nazareth; in addition, though scarcely any encyclopedia or history will say so, he rejected the traditional idea of God as an unmoved mover, an immutable and all-determining power.

Believing that human beings have genuine freedom, Socinus denied that God either determines or eternally knows our free acts. Rather, we determine the acts, and God knows them only after the fact or as they occur.

This view implies real novelty in the divine consciousness, it means that we cause changes in God. In this bold break with tradition, Socinus anticipated our current process theology.

What he chiefly lacked was the insight that the idea of creaturely freedom, which creates novelty even in God, should be generalized to apply to all creatures, even the humblest—for instance, atoms. Human creativity is then no sheer exception in an otherwise divinely determined world but is only an extremely special, high-level case of creaturely freedom...

Another important passage of theological history has been neglected. The father of American theology, Jonathan Edwards, was, as is well known, a theological determinist who believed divine power decides all our actions. What is less well known that the Unitarian-bred Ralph Waldo Emerson held the same belief, as his diary makes clear.

I deeply admire Emerson, but in his religious metaphysics he was surprisingly close to Edwards. This is one of many instances of the sad fact that the metaphysical originality and courage of Socinus and his followers were for several centuries allowed to go for nothing.

Another instance of their lying fallow is that when, some years ago, the Unitarian church of England drew up a statement of faith, God was defined as immutable in the document.

Why labor the point? Three centuries were wasted by the failure of scholars to do their job in dealing the [sic.] Socinianism. I had to read a little-known German work by Otto Fock entitled, Der Socinianismus, to find out what the Socinians believed about God.

Hartshorne thought that Socinus did not go far enough, and that he had anticipated "our current process philosophy." Moreover, his views on God's foreknowledge lay dormant, even among those who embraced his denial of the deity of Jesus Christ and became Unitarians.

Open theists do not merely repeat the same views as process philosophers, there are significant differences. They are in fact much closer to Socinus than Hartshorne. They have been, however, thinking Socinus' thoughts after him, even if, unlike Hartshorne (at least by way of confirmation), they did so without reading his works.

The correspondence of their views is undeniable, and the denials of it really lack plausibility when carefully examined.

have you read John W. Cooper's Panentheism: The other god of the philosophers?

This is just really unhelpful. Just because there is some overlap between what a heretic thinks and what a person think, does not mean that someone holds all of their views. Greg Boyd's (one of the leading advocates of Open Theism) response to the claim that they are Socianists is as follows (writing about John Piper's view that he fits in that camp):

My most significant complaint about any of the essays which John distributed is his labeling me a "Socinian." It is true that, so far as we can tell, the sixteenth century heretic Socinius held that the future was not exhaustively settled, either in reality or in God's mind. He also denied the Trinity, the divinity of Jesus and the substitutionary atonement, however. Calling me a "Socinian" is a bit like me calling John a "Muslim" because his view of God as predestining every detail of world history is exactly what the Koran teaches. It would be an unfair accusation, of course, because John parts from the Muslim teaching in most other important respects. But in just the same way I differ from Socinius in all other respects. Indeed, though I cannot enter into the issue here, its doubtful that Socinius' view is the same as mine and even more doubtful that he held to it for the reasons I hold to mine. "

1. I have deliberately and clearly not claimed that "because there is some overlap between what a heretic thinks and what a person thinks, does not mean that someone holds all their views." Read the original post again. That open theists affirm the entirety of Socinian views forms no part of my comparison and argument.

2. Open theist John Sanders has written that "we acknowledge that heretics such as the sixteenth-century Anabaptist Fausto Socinus affirmed this view." (The God Who Risks, second edition 2007, p.170)

Open theists do not hold to Socinian views in toto, they do hold to the Socinian view of divine foreknowledge, and I will argue in a published article on this that they do so because of a common commitment to libertarian free will.

I am also aware that there are nuances to the way that Boyd articulates his view that are different to other open theist writers.

Can you show where Piper called Boyd a Socinian in such an unqualified way?