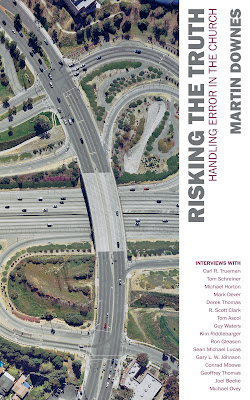 Here is Sinclair Ferguson's foreword to Risking the Truth: Handling Error in the Church


You can pre-order here or here


It is a privilege to introduce and recommend this unique book. The brain-child of Martin Downes it makes a very distinctive contribution to the early 21st century church. In addition, for anyone interested in the views of some of the thought-leaders in a variety of reformed communities, Martin Downes has assembled an all-star team whose contexts are as diverse as –among other places—the Western Isles of Scotland where Iain D Campbell is minister, to the Eastern States of the USA where Carl Trueman and Mark Dever reside, Wheaton outside of Chicago where Greg Beale teaches, Jackson Mississippi (which wins the prize for its three resident contributors), to the West Coast of America, and then to Africa where Conrad Mbewe serves as pastor of Kabwata Baptist Church in Zambia, and then to London where Mike Ovey teaches theology, and back to home base in Wales where Martin Downes himself is a minister.

These are men to whom others, older as well as younger, look to guide their patterns of thought about the gospel, the church and the world. Most of them know each other personally, or at least by reputation, and share a mutual esteem for one another’s work. In addition, they all belong to a variety of “communities” connected together in an unplanned but real network of churches, institutions and publications. Together they represent a prodigious literary output.

These “communities”—churches, seminaries, organizations and informal networks—share in different ways in the extraordinary world-wide resurgence of reformed theology that has taken place in the past half century or so. Some of them are part of denominations (such as The Free Church of Scotland) or institutions (like Westminster Theological Seminary) which have long maintained the theology of Calvin and the Reformed Confessions. But others—as their personal testimonies indicate—have, with a multitude of others, come upon reformed theology only by experiencing what Calvin himself described as an “unexpected conversion.”

Most of these men belong to the second and third generations of this resurgence and are now engaged in significant ministries that seek to encourage and train the fourth generation. Perhaps this fourth generation will prove to be the most interesting and widespread generation yet. For fascinatingly, while in the 1960s “The Jesus Movement” might be mentioned in secular publications such as Time magazine, in that magazine’s 2009 annual review of ideas that are changing the world, the new Calvinism was listed as number three.

In many ways this is a sign of both growth and decay. It signals remarkable growth in the influence of reformed theology. Many are turning to it having found that much generic evangelicalism has drifted at one edge into superficiality and at the other into theological convictions antithetical to the fundamentally reformed orientation of classical evangelicalism. Today—not least among younger men and women—the importance of doctrine, seriousness of spirituality, and a recovery of biblical exposition, have all become major desiderata in the movements with which they want to be identified.

Over the centuries when God has purposed a fresh work he has often brought together brotherhoods or networks of Christian leaders to point the way forwards. This is in some measure happening in our own day. To use the language of 2 Samuel 5:24, there is “the sound of marching in the tops of the balsam trees . . .” and a sense that “the Lord has gone out before you.”

It is, therefore, an exciting time to be reformed.

But exciting times can also be testing times. New energy and zeal are often accompanied by short roots that do not go down deeply into the soil. The discovery of new doctrine can easily lead to imbalance. It can propel an individual into an unhealthy desire always to hold something new. But the highway to novelty is also the road to deviation.

Against that background Martin Downes has asked each of these interviewees a series of penetrating questions about false teaching and living—how it arises, why we fall into it, what contributes to it, and how in distinction we can maintain faithfulness to the gospel. The fact that we have twenty of them is itself a safeguard against the ever-present danger of “choose your guru.” For here we find diversity of personality (the interviewees are far from being a collection of cookie-cutter clones!). Variety of context and personal background guarantees a healthy diversity of approach. There is safety in a community of counselors.

Yet at the same time, running throughout these pages is a strong consistency. Things may be said in different words, but the same emphases recur again and again. Among these emphases are: the importance of biblical exposition in the life of the church, the value of the well-tested and pastorally well-proven Confessions of the church, the importance of guarding the heart, the privilege of genuine friendships in which men seek to hold each other to a gospel life-style.

So, put some logs, or coal, or peat, on the fire; make (or fix) yourself a pot of tea or coffee; settle back into your favourite chair—and spend an evening or a rainy afternoon in the company of Martin Downes. Enjoy the way in which he brings one after another of these thought-leaders into your living room—and then himself sits down to talk with you before the end of the day. Here you will find food for thought, and much to bring practical stimulus and challenge. And you will surely be the better for it. I hope I am.

Posted by Martin Downes at 6:14 PM