Lessons from Calvin as a pastor and expositor 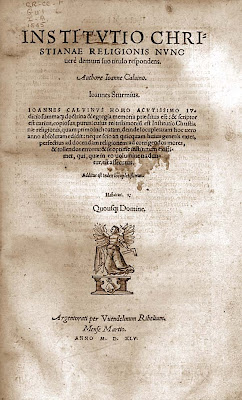 "What an example Calvin sets here for us to follow! We are too apt to find fault with others and be able to see no good in them merely because in this or that we disagree with them. It is a lack of humility that makes us unable to appreciate others and leads us to focus exclusively on their faults."

My old friend Alan Davey, from the Rhondda Valley no less (and of course my predecessor at Deeside before become a missionary in Bordeaux), has posted some excellent links to Sam Waldron's Lessons from Calvin as a pastor and expositor. You can read the all if you go here. I found the following words challenging, convicting and encouraging:

IX. Calvin’s ministry manifests great humility and appreciation for the ministry of others.

Perhaps the greatest illustration of the ministerial humility of Calvin is his conduct toward the ministers who replaced Calvin and Farel when they were ejected from Geneva in 1538. Calvin and Farel had many sympathizers and followers still in Geneva. You can imagine that they would not have much use for their replacements. Nevertheless, Calvin wrote in support of those who replaced him and told his followers to accept their ministry.

God not only commands us to render a willing obedience with fear and trembling to the Word when it is preaced to us, but also commands that the ministers of the Word are to be treated with honour and reverance, for they are to be clothed with his authority as his ambassadors, and he wishes them to be acknowledged as his own angels and envoys. (Parker, John Calvin, 94)

Another illustration of the humility of Calvin in this matter has to do with his attitude toward Luther. By the time Calvin came on the scene there was an open breach between the Swiss Reformed and the German Lutherans. Yet Calvin never let the hostility of Luther to the Swiss deter him from showing great respect for Luther. The influence of Luther is everywhere evident in the first (1536) edition of the Institutes. Calvin’s doctrine of justification by faith alone—the crucial doctrine of the Reformation—is plainly Luther’s doctrine. Calvin built the road of reformation exactly along the trail blazed the pioneer Luther. Calvin wrote Bullinger about Luther:

Consider how great a man Luther is, and what excellent gifts he has; the strength of mind and resolute constancy, the skillfulness, efficiency and theological power he has used in devoting all his energies to overthrowing the reign of Antichrist and to spread far and near the teaching of salvation. I have often said that even if he were to call me a devil I should still regard him as an outstanding servant of God. (Parker, John Calvin, 163)

The funny thing about this statement is that Luther was quite capable of calling his enemies devils. (I don’t think, however, he ever called Calvin this.)

What an example Calvin sets here for us to follow! We are too apt to find fault with others and be able to see no good in them merely because in this or that we disagree with them. It is a lack of humility that makes us unable to appreciate others and leads us to focus exclusively on their faults. What would have happened to the Reformation if the Calvin had allowed Luther’s well-know faults to prejudice him against everything good and wonderful and scriptural that Luther taught? There are great lessons in this for us.