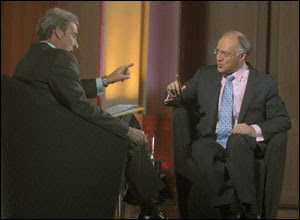 Next week is the Banner of Truth Ministers' Conference in Leicester. I'm really looking forward to it, not least because I will get to sit under God's Word. It will also be great to catch up with friends in the ministry. If you are a minister in the UK, and you haven't booked yet, why not see if they still have space?

As much as I want to say come along because, among others, Sinclair Ferguson, Derek Thomas and Garry Williams are speaking, I fear that this would appeal to that Corinthian spirit in us all. So instead come along because this conference is prayerful, and you will drink deeply from the wells of God's sovereign grace in the gospel, in conversion, and in the Christian life.

Oh, and if you are under forty (or have Alistair Begg's genes and so pass for under 40) you can come along to the after hours interview that I'll be doing with Sinclair Ferguson and Derek Thomas.
Posted by Martin Downes at 5:10 PM

I'm looking forward to it too, my first time.

See you there. I managed to sneak into kiddies' corner last year, despite being over 40. I think they might throw me out if I tried to hang around this time. "Change and decay in all around I see" - especially when I look in the mirror.

Tell them they HAVE to put the addresses on the website in MP3 format. EMW do for Aber, tell them !

Encouraging to hear of it still going strong.

Thanks for doing this Martin. Can we submit any questions for this interview? Just curious.

As far as I am aware the interview will not be recorded. You have to be there to benefit from it. The plan is for me to get things going and then to open it up to the floor.

Perhaps Guy Davies could wear a wig and live blog the interview.

What's that supposed to mean, Downsie? And don't forget that in a proper interview with top flight theologians, you have to ask for their fave tunes.

Hey look, my thatch is thinning nicely, and you've got several years headstart on me.

Baldiness is next to godliness. Just ask Gary Brady.