The Reformation and penal substitution 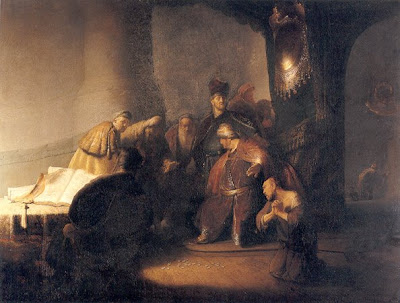 Inasmuch as the Reformation had learned to know sin primarily as guilt, atonement became central in the work of Christ. Sin was of such a nature that it aroused God's wrath. Needed above all to still that wrath, to satisfy God's justice, was the satisfaction accomplished by the "God-man."

He achieved it by putting himself in our place as the guarantor of the covenant, taking upon himself the full guilt and punishment of sin, and submitting to the total demand of the law of God. Hence the work of Christ consists not so much in his humility, nor only in his death, but in his total--active as well as passive--obedience.

He accomplished this work in his threefold office, not only as prophet by teaching us and giving us an example and exhorting us to love but also as priest and king.

The objective and subjective sides of reconciliation, accordingly, are clearly distinguished. Christ accomplished everything. All the benefits are objectively contained in his person. Since by his sacrifice Christ met the requirements of God's justice, he objectively changed the relation between God and humankind and, consequently, all other relations between humankind to sin, death, Satan, and the world as well.

The primary benefit, therefore, is the forgiveness of sins and consequently also deliverance from pollution, death, law, and Satan. Christ is the only mediator between God and humankind, the all-sufficient Saviour, the highest prophet, the only priest, the true king.