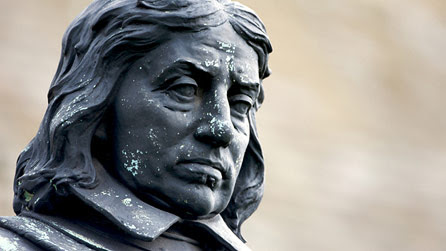 In Hans Kung's memoirs (Disputed Truth, Memoirs II) he refers to his travels through Cromwell, New Zealand, named he says 'after the famous Scottish Reformer, revolutionary and 'Lord Protector' Oliver Cromwell'...oops, that'll be the same Oliver Cromwell who was one of the most famous Englishmen ever to walk the earth.  Oh well, at least Kung never claimed to be infallible.

In the same ball-park is Mark Driscoll's anecdote in his book on the atonement (page 170), that James Arminius was in fact the son-in-law of John Calvin.  I have also discovered, claimed by another writer, that Theodore Beza was Calvin's son-in-law too.

Just imagine the fun the three of them must have had debating limited atonement.  I bet they teased him a lot, "Go on old boy tell us what you really think, stop messing about with all that ambiguous use of 'the world', and 'all'."  But I am sure that John just chuckled to himself and said "Wouldn't it be funny if several centuries from now people debated what I really thought about the matter."

Posted by Martin Downes at 8:44 AM