A Skin Full of Chemicals (Part 2) 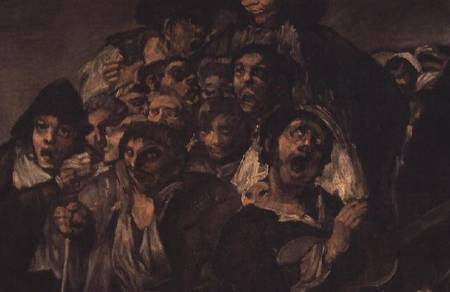 The atmosphere, expected and unwelcome, enveloped him.  The smell of heated, sinking putrefaction; cloying, disturbing, suffusing itself into every pore, clinging to every garment, a portent and foretaste of the grave’s greater appetite to undo the vitals of life.  The stench of sores, of infection, of ageing skin, of decomposition already working in the depths of the organs and forcing itself out, of dental rot.

When John returned home he would furiously shower and scrub to remove the lingering odour of the place.  He glanced around the room to see a thinning number of shrunken, withered, human beings; of people embedded in permafrost.  Their years having drawn nigh, the make-up of homo sapiens was slowly, inexorably, being stripped away.  This was a charnel house for the living, a parlour furnished for those enduring a double death.

The experiences of close relatives followed a familiar pattern.  Like a wound that never healed, each visit brought back the visceral awareness of first losing them in the consuming fog of dementia.  The memory of a life irretrievably lost, as the fragility of mind and will found no escape from the ineluctable reach of this preternatural shroud, abided as a mournful presence in the room.

At times the pressure of this sadness seemed so great, so palpable, it was as if the room would soon totter and collapse under the weight of it.  John now belonged to the ranks of those who came to watch and wait for the body to give way.  He shared in this futility, belonged to a fellowship of fellow sufferers, knew their sense of emotional exhaustion and used up grief,  and counted down to the moment when a strange sense of relief would inevitably come.  But although his experience was not a-typical there was about his demeanour, as any health professional and close observer of human behaviour could see, an element of detachment more akin to indifference than to weariness.

A single thread, delicate as gossamer, held him to this place; a bond of nature tightly anchored, wearing thin, biologically weakening.   Across the room, amid the grotesque forms of what looked to him like so many animated cadavers sat listlessly on chairs, stood his father.

A tall man in his prime, he had begun to bow and stoop.  Equine like strength having left him, his ill-fitting clothes hung loosely upon his rigid, calcified frame, giving him the resemblance of a badly dressed weather worn scarecrow.  His skin was sallow.  His pock marked face sported a day’s growth of greying stubble.  The eyes were as bloodshot and hollow as a drunk’s.  Vacant holes, bereft of the power of recognition.

The lower lip glistened and protruded with a childlike defiance, bearing the sullen aspect of one whose ambitions had been curtailed by a superior force.  He was diminishing with every grain of sand that passed through the aperture of an egg-timer.  It was hard not to pity him, not to pity what he had become, what he had been contorted into by the downward drag of this mental illness.

But there was a darkly comedic element to his appearance, an inappropriate adornment that struck a note of sick humour.  As a result of repeated bumps, scrapes, and falls, his wakening hours forced upon him the wearing of padded head gear that made him resemble an amateur boxer.  Without his knowing it George Daniels cut a tragic, pathetic, risible figure.  He was now a parody of the man captured in the photographs in his son’s home.

This patient, reassuring note, daily struck in the tone of the staff nurse seemed illimitable.  It always did.  Her voice had in it a perpetual calmness, never once betraying a hint of anger, of annoyance.  Where did that kind of patience come from?  Was she born with it?  Was it a gift?  Was it cultivated?  Was it simply a fake professional demeanour, a façade concealing an interior of impersonal indifference?

A vein of guilt opened up within him.  Guilt for the anger within him that contact with his father provoked.  Guilt for the frustration he felt that their communication, limited in the best of the years had drifted into the cacophonous exchange between the lucid and the disturbed.  Staccato.  Jarring.  A shambolic vocalizing of glottal sounds, verbal randomness, unblushing expletives, and ragged elements of cohesion.
Posted by Martin Downes at 8:32 AM