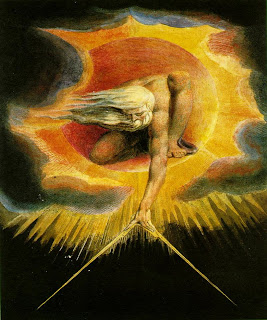 We owe the assertion that God is merely a projection of human attributes on a cosmic scale to Ludwig Feuerbach (1804-1872).  Having no objective existence, God was no more than make believe, the result of wish fulfilment.  Perhaps the 21st Century gloss would be to stress that it is an infantile wish, cherished by the intellectually immature, and worthy of being mocked.

De Lubac's The Drama of Atheist Humanism has a helpful summary of the 19th Century dismantling of Christian belief:

The substance of what Strauss said, in his Life of Jesus (1835), was that the Gospels are myths expressing the aspirations of the Jewish people.  In Religion Feuerbach was to make the parallel assertion that God is only a myth in which the aspirations of the human consciousness are expressed.  "Those who have no desires have no gods either...gods are men's wishes in corporeal form." (p. 27)

For Feuerbach, then, God is only the sum of the attributes that make up the greatness of man. (p. 29-30)

Feuerbach's assertion had a powerful impact on his contemporaries.  Engels said that "we all straightway became Feuerbachians."  But it was an assertion all the same.

Does Feuerbach's assertion help us to assess whether the wish, or desire, for God originates solely in human experience?  Does it rule out the possibility that it has been implanted in us by a divine hand?  If so, how exactly?  Is it a given that presupposes atheism on other grounds to gain traction or to pass off as an argument?  The existence of the wish for God is one thing, the explanation for it is, after all, another.  The wish does not prove that what we desire does not exist.

C. S. Lewis replied to Feuerbach's position by arguing that the most probable explanation for the existence of a desire that no experience seemed to satisfy was the fact that we are made for another world.  Is there anything in Feuerbach's assertion that would invalidate Lewis' response?

Can some religious views be ascribed to projection?  Of course.  Does that demonstrate the universal validity of Feuerbach's assertion?  Hardly.  Unless of course we think it is permissible to lump all religious views together without making any distinctions.  But a case has to be made for that.

Can atheism's denial of God be interpreted as an inversion of Feuerbach's assertion?  In the flight from God could some atheists be driven by a desire to escape from accountability of their actions?  Alister McGrath's example of this (from memory, I've not read his book on apologetics since 1996) is that of a Nazi concentration camp guard who denies God in order to evade being judged.

The wish for a Godless universe does not prove that God does not exist.  But neither Feuerbach's view of God as wish fulfilment, nor the rejoinder about evading God, is necessarily true.  Both positions are assertions relying on actual arguments and evidences.
Posted by Martin Downes at 8:24 PM