The Unquenchable Flame: a book you won't want to put down 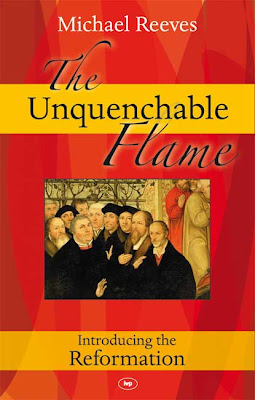 During my days in student work there were certain books that fell into the "must read" category. Quite simply books so good, so clear, so helpful, that they could shape the thinking of young minds with the truth of God's Word.

To that list I would now add The Unquenchable Flame: Introducing the Reformation (IVP) by Mike Reeves. In an Evangelical publishing world where we routinely get the Good, the Bad and the Ugly, this book shines like a jewel perched atop a dung heap.

Why is it a must read? For the following reasons...

Reader, dost though fear that church history is dull? Dost though entertain foolish thoughts about the boredom of reading about the past? Let thy fears be allayed. Stylistically, Mike Reeves does for Reformation history what Dale Ralph Davis' books have done for Old Testament narrative. The book abounds with creative descriptions of people, conflicts, debates, and controversies. A rollicking good read and a real page turner. The style will have you smiling and chuckling along.

2. It gets to the heart of the issues

In the space of 185 pages we get acquainted with religion before the Reformation, vivid portraits of Luther, Zwingli, Calvin, the Reformation in Britain, and the Puritans who, in Milton's words were about "reforming the Reformation" as well as wearing black and scowling (p. 145). In this short amount of space Mike Reeves has really packed in all the burning issues (at times quite literally) that rocked Europe five hundred years ago.

3. It shows that sound theology matters

The Christian world before the Reformation abounded with theology. The trouble was so much of it was bad. I've stood in the side chapel at St. Peter's Cathedral in Geneva and read the Latin text Post Tenebras Lux (After Darkness Light). That is what the Reformation was all about: a Bible in your own language, a faithful preaching ministry, and a message of acceptance with God based not upon ceremonies, sacraments and works, but upon the free grace of God in Jesus Christ:

...for if, as Luther argued, I am given the righteous status of Christ without that status being in any way dependent upon the state of my heart or life, then there is no place for a purgatory where I am made worthy of heaven or indulgences to speed me there. (p. 180)

And on this point a great gulf is still fixed between Protestant and Roman Catholic views of justification, even after a spate of recent attempts to narrow points of agreement and to work toward a jointly acceptable form of words. You can about right up to date conversations and tensions about this in Collin Hansen's recent Christianity Today article here.

Reeves shows that on justification by faith alone nothing has really moved on since the Regensberg conference way back in 1541. He concludes:

Thus, while attempts to foster greater Christian unity must be applauded, it must also be recognized that, as things stand, the Reformation is anything but over. (p. 180)

4. It is a recipe for revolution

It is here that we have seen the triumph of the mealy-mouthed Erasmus over the spirit of Martin Luther. Let Reeves explain:

To modern ears, the debates of the Reformation sound like rather pernickety wars over words. Is it, we ask, really worth squabbling over whether justification is by faith (as Rome agreed) or by faith alone (as the Reformers insisted)? (p. 182)

That all depends on what is at stake. "They were hardly small concerns being debated," but issues of eternal consequence (p. 182). Where will I go when I die? How can I know? Is justification a process? Can it be lost? Will I go to purgatory? Can I confidently rely for my salvation on the finished work of Christ alone?

In a day when Christian belief is derided from without, and when doctrine has fallen on hard times from within, reading about the ideas that shaped the Protestant churches of Europe in the sixteenth century is a bit like sticking your head into a barrel of icy water. Bracing, a violent shock to the system, and a sure way to make you mentally alert.

Really, you should come away asking yourself "if these truths mattered so much to the Reformers back then, how come they seem to matter so little to many evangelicals today?" Well, like Luther, try standing before the holiness of God (p. 42-3). Like Zwingli, stand at the edge of death's abyss and stare into eternity (p. 64). Like Calvin, see if what you believe is really worth believing if you have to endure exile from your homeland for the sake of the gospel (p. 90-2).

The book, of course (for it says so on the cover), is all about introducing the Reformation. At the back you will find a short guide for further reading. Make good use of it.

The only thing that marrs the book is the reproduction in English of two foul words that came out of the mouth of Luther. Granted one of them is of King James Version vintage, but, nonetheless, this is a blemish and may, for some readers, like a blue bottle resting on a buttered scone, spoil the enjoyment.

For US readers the good news is that Broadman & Holman will be releasing the book on April 1st 2010 (I kid you not). UK readers can get it for a special offer price by clicking here.