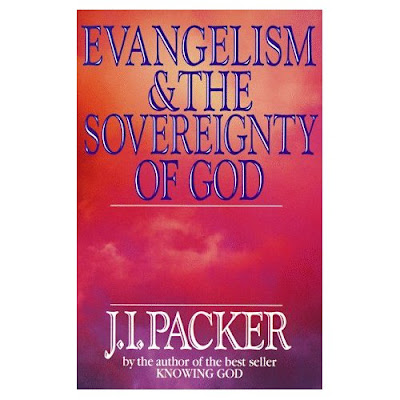 On the 24th October 1959 J. I. Packer spoke at a meeting held at Westminster Chapel on the relationship between God's sovereignty and evangelism. This was a pre-mission meeting, held before an evangelistic mission organised by the LIFCU (The London Inter-Faculty Christian Union).

Why was there a need to address this subject at all?

We begin by noting some of the historic roots.

In the 1950s, in British evangelicalism, there had been a resurgence of Calvinism. Although Dr. Martyn Lloyd-Jones had been perhaps the only prominent preacher of the older Calvinistic theology of the Reformers and Puritans, that many believed had died out with Spurgeon, many students, graduates and young people were rediscovering the biblical theology of this older evangelicalism.

Iain Murray refers to this as "A New Generation and New Thought" in the second volume of his authorized biography of Lloyd-Jones, noting that in 1959 Lloyd-Jones "could speak of the 'tremendously encouraging fact' that 'there is obviously a new interest in Reformed literature and this seems to me to be true right through the world'" (The Fight of Faith, p. 225). Instrumental in this had been the emergence of the Banner of Truth Trust and the republication of older Puritan works.

There had been a remarkable stirring among younger people, a captivating rediscovery of the sovereignty of God in salvation. The impact of this is best captured by the words of the affectionately remembered Rev. Derek Swann. As a ministerial student he attended the third IVF Welsh Conference in July 1951 where Dr. Lloyd-Jones had spoken on "The Sovereignty of God."

The Doctor believed that there was an unusual openness to the truth among these young people. In his first address Lloyd-Jones had begun with a definition of divine sovereignty and reasons why this truth was so important. His second address was a lengthy biblical overview of divine sovereignty. His third address focussed on the grace of God in the plan of salvation and in the conversion of the individual.

Derek Swann wrote of the impact of these messages:

When Dr. Lloyd-Jones spoke on the sovereignty of God, many of us came to the doctrines of grace for the first time, myself included. He left the doctrine of the sovereignty in salvation to his last talk, having in the previous two talks laid down all the principles that he would apply in the final talk.

I accepted everything in the first two talks and had eventually to accept them in the third. I remember it was early in the morning in conversation with Gwyn Walters that the truth of election dawned on me. I was so overcome with the wonder of it all that I had to fight back the tears. For many of us since, election has been an affair of the heart as well as the head. (The Fight of Faith, p. 245-6)

And so the story would continue. It is idle to speak of the 21st century resurgence without acknowledging the gains of the post-WWII generation. Under God's sovereignty we owe a great debt to their faith, vision, preaching, publications, and institutional endeavours.

Along with the recovery of doctrine came the understandable effects of growing pains. The most enthusiastic believers would not always make the best advocates. Nor, for that matter, is it the case that having got hold of something true and vital that we are sufficiently mature and balanced enough to be able to hold that truth in the right way.

The immediate context for Packer's address, after a decade of widespread Calvinistic recovery, was one of an "unusual degree of controversy" (Murray, The Fight of Faith, P. 378). This is hardly surprising since the recovery of Calvinistic views of conversion and sovereign grace occurred in the context of an evangelicalism still influenced by the methodology and theology of Finney and Moody, and receptive to the visits of Billy Graham.

One strand of this local controversy was over the question of the need for any special measures in evangelism at all, and a re-thinking of the received wisdom about evangelistic techniques. Packer's address would press home the reality of God's sovereignty in salvation and the need for evangelism. We should be Calvinists and evangelists.

More on this later in the week
Posted by Martin Downes at 10:51 AM