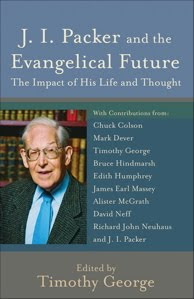 It seems that some folks are rather upset by Dr. Carl Trueman's description of J. I. Packer as "in some ways a failure." Try concentrating on the words "in some ways" rather than solely on the word "failure."

On the matter of the "lost leader" that non-conformists needed bear this in mind:

One commentator, in 1977, wrote of Packer’s diminished influence among evangelical Anglicans. They had, quite simply, moved on. This assessment is also given by his biographer Alister McGrath, “Increasingly, Packer felt he was a ‘pelican in the wilderness’. Nobody seemed to want him very much.” He was left with no institutional role in evangelical Anglican leadership circles. I think you have to understand Dr. Trueman’s comments against this historic background.
Posted by Martin Downes at 6:24 PM

Hardly a surprise there, since the approach of JI Packer leaves no urgency or imperative to contend for the Reformation Faith of the Church of England and Anglicanism.

The problem is not as Lloyd-Jones construed in crude terms of Church of England versus non-conformity but simply this:

Is justification by faith alone as the standing or falling article of the church and the hinge by which true religion turns truly understood, proclaimed and practiced by evangelicals whether Anglicans or Non-Conformists in this day and age?

If so, why the compromise with sola fide and sola Scriptura in doctrine and practice in BOTH evangelical Anglican and evangelical Non-Conformist circles?