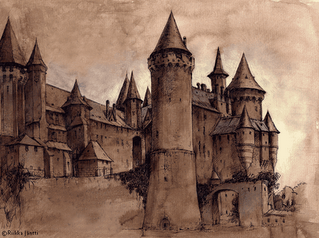 Whilst he is away on a journey the city of a great king has come under attack. If the city falls the kingdom will be overrun by the enemies of the king.

Now the king's enemies are crafty men. Even though the serve another master they have disguised themselves as loyal servants of the true king. They are seeking to overthrow the king's rule by changing his decrees and laws. But as they do so they never fail to swear their loyalty to the true king.

Some of the king's subjects have been thrown into great confusion by this. Who has the right to speak for the king and to interpret his wise laws and decrees? Others say that there is room enough in the city for all the officials who say that they serve the king, even if there are differences in how they think about him.

Yet there is hope. The king has true servants. These men are experts at understanding the ways and decrees of the king that he has written down for them in a book. They have been trained to rightly handle the king's law and have been entrusted to oversee his kingdom.

The king's enemies want to overthrow the kingdom not by laying the city to siege but by persuading the king's subjects to follow their interpretation of the king. Instead of attacking the city with a sword they want to poison the minds of the citizens of the land so that they will be duped into a rebellion against the king. When the true king returns they will not recognise him or be willing to live under his rule. What is worse the true king will say that he does not know them. They have been serving someone else all along, even though they claimed (and many no doubt sincerely believed this) to be loyal to him.

If these infiltrators succeed the kingdom will fall. These impostors must be fought. They must be engaged in debate. Their lies must be exposed. The king's subjects need to see who is telling the truth and who is misrepresenting the king. These men are pretenders who must be removed from the city so that their poisonous ideas will be stopped. Their cunningly devised fables are making the king's servants change the allegiance of their hearts.

Even though the king's true officials are peace loving they know that if they do not fight they will have betrayed their king and let his honour be stolen from him.
Posted by Martin Downes at 8:42 AM