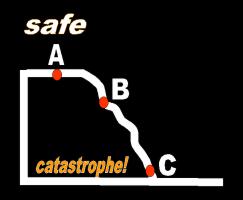 The relationship between certain doctrines is such that a deliberate denial of one doctrine does not take long to alter others and to re-orientate the gospel. This is not an unfounded accusation, the attributing of a series of unforeseen consequences stemming from a faulty premise (although that situation can exist). Rather it is the explicit effect of a determined act of unfaithfulness.

Here is an extract from Wayne Grudem's chapter, "Why, When and for What Should We Draw New Boundaries?" in Beyond The Bounds.

"Some doctrines are absolutely important to maintain because of their effect on other doctrines. Examples would include doctrines such as the Trinity, or the deity and humanity of Christ in one person, or the inerrancy of Scripture, or justification by faith alone. If we abandon one of those doctrines, many other doctrines will be lost as well.

In the early part of the twentieth century, Protestant liberals began to emphasise the love of God so much (and who could object to that?) that they came to deny the wrath of God. They denied that God exercised personal wrath toward his sinful creatures.

At that point someone might have said, "So what? This is just one attribute of God, and I can't see that it's that important." But the result was highly destructive, because once they denied the wrath of God, then they had to deny that Jesus bore God's wrath against our sins when he was on the cross. They had to deny the substitutionary atonement of Christ. And once that happens, then the whole Christian gospel is lost."

You see they had to do it. Their choice to deny the wrath of God was also a choice to deny the atonement. God's righteous personal anger against sin, a function of his attribute of holiness, is an integral part of the framework of doctrines that explain what it means that "Christ died for our sins according to the Scriptures". Deny the wrath of God and you must change your doctrine of the atonement as well.
Posted by Martin Downes at 12:07 PM