The Scapegoat: the gospel according to Leviticus 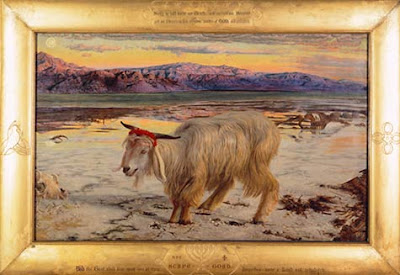 A sermon on Leviticus 16 preached at Christ Church Deeside

My understanding of how to preach the text, as well as being shaped by the commentaries, has been significantly helped by Justin Mote.

The paining is by Holman Hunt and is exhibited in the Lady Lever Art Gallery (just thirty minutes from our home). Two texts are inscribed on the frame. They are:

'Surely he hath borne our Griefs, and carried our Sorrows. Yet we did esteem him stricken, smitten of GOD, and afflicted.' (Isaiah LIII, 4)

'And the Goat shall bear upon him all their iniquities unto a Land not inhabited.' (Leviticus XVI, 22)

This inter-canonical connection would no doubt have pleased John Owen.

The following is from John Owen's Vindicae Evangelicae:

For a man to "bear his iniquity," is, constantly, for him to answer for the guilt and undergo the punishment due to it. (455)

As the high priest confessed all the sins, iniquities, and transgressions of the people, and laid them on the head of the scape-goat, which he bare, undergoing the utmost punishment he was capable of, and that punishment which, in the general kind and nature, is the punishment due to sin,--an evil and violent death; so did God lay all the sins, all the punishment due to them, really upon one that was fit, able, and appointed to bear it, which he suffered under to the utmost that the justice of God required on that account.

He took a view of all our sins and iniquities. He knew what was past and what was to come, knowing all our thoughts afar off. Not the least error of our minds, darkness of our understandings, perverseness of our wills, carnality of our affections, sin of our natures or lives, escaped him. (447-8)

Christ looked on the church through the window of the promise and the lattice of the Levitical ceremonies. (450)

And the "surety" of the covenant is he also...such a surety as paid that which he never took, made satisfaction for those sins which he never did...being made liable to them, he was punished for them. (449)
Posted by Martin Downes at 1:00 PM