The passionate love of the Saviour-Shepherd 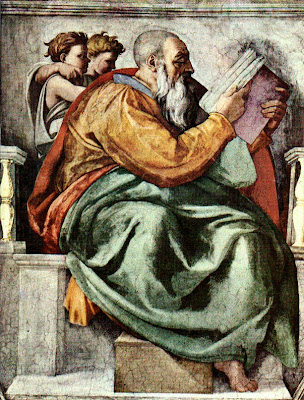 Such helpful words from Meredith Kline about Jesus as the Angel of the Lord in Zechariah 1:12 (taken from article on "The Rider of the Red Horse"):

Whether answering or asking the "how long?" of eschatological hope, the messianic Angel could not but have in view those new covenant developments that would be set in motion by his own entrance into history as the Messiah, the son of David.

When he cries "how long?" he is expressing the eagerness of the Son for the arrival of the hour when the Father will send him to earth on his covenanted mission to make an atonement for his people, to bring in everlasting righteousness, and to anoint the eternal temple.

His cry of longing reveals the passionate love of the savior-shepherd for the flock he hastens in spirit to seek and find and bring home.

He goes on to this summary statement:

D. Christ—Judge and Advocate: In the opening night vision of Zechariah the messianic Angel is cast in the dual role of judge of the nations and advocate of the Israel of God.

Remarkably, this portraiture of Christ in his royal-priestly office is found again at each main juncture in the structure of Zechariah: in the central, fourth member (3:1-10) of the seven night visions; in the central hinge section (6:9-15) of the overall diptych form of the book; and in the central unit (11:1-17) of the burdens that comprise the second half of the prophecy.

Most like the first vision is Zechariah 3, where the Angel of the Lord is again present, presiding as judge, yet simultaneously advocating the cause of Joshua the high priest, Satan-accused but chosen of God.

The Christian readily recognizes his savior-shepherd as the subject of this priest-king portrait. Jesus is the Angel of the Lord, now come in the flesh. To him all authority in heaven and earth has been given and in the day of his parousia he will judge all the nations in righteousness.

Until that day he intercedes in the court of heaven for his afflicted flock in the wilderness. His claim before the ancient of days is that the "seventy years" curse of divine wrath has been fully accomplished for his redeemed. That eternal wrath of God against them was compressed into the hours of his once-for-all sufferings on the Cross.

Hence, the accuser of the brethren is rebuked (cf. Zech. 3:2). They overcome him because of the blood of the Lamb (Rev. 12:11). Beyond his passive obedience in his enduring of the "seventy years," our advocate at the right hand of the Father presents in our behalf the claim of his active obedience, the fulfillment of the covenant probation, and that merit imputed to us is the ground of our inheritance of the heavenly Jerusalem.

The advocacy of our ever-living heavenly priest is not in vain. It prevails to bring the longed for response of favor and blessing from the Lord of hosts (cf. Zech. 1:13-17). He is the true Servant of the Lord, able to save to the uttermost them that draw near unto God through him (Isa. 53:12; Rom. 8:34; Heb. 7:28).

Posted by Martin Downes at 3:49 PM

As an attorney, I can all the more appreciate your post's description of Christ in His dual role as our Advocate and as our Judge.

It gives great confidence to a client to have a wise and skillful Advocate to represent him or her. We have such a "Wonderful Counselor" in Christ. Isaiah 9:6.

But, because Christ is also our Judge, we know for absolutely sure that He will most certainly give us the judgment of "not guilty" that He Himself advocates. We rest totally secure and saved.