An interview on the doctrine of Scripture with Greg Beale (2) 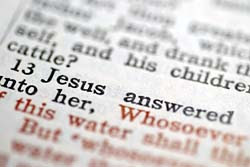 The following interview with Professor Greg Beale is taken from Risking the Truth: Handling Error in the Church

In February 2011 Greg Beale will be one of the speakers at the Affinity Theological Study Conference on the doctrine of Scripture. Other speakers include Carl Trueman, Daniel Strange, Martin Downes and Hywel Jones.

Part 2: Dealing with denials and criticisms of the doctrine of inerrancy

What are some of the consequences of denying inerrancy?

Ultimately, if you hold just to limited infallibility (for example, just the theological and soteric doctrines are inspired, not the other parts of the Bible), what can happen is that one ends up choosing what is inspired and trustworthy. What is infallible is different for different interpreters, and so one can end up making a Bible within the Bible for oneself. That is problematic. Someone might say that there are not a lot of errors, just a few. Well that is up to the ‘error’ decider. For some it may be more, for others less, but that way you don’t end up with a fully inspired Bible.

I should address the typical objection that it is irrelevant to hold that the Scriptures were inspired in the original autographs, since we no longer have them. However, if we didn’t have originally inspired autographs who knows how many errors we could have? And when did the Bible become inspired if they were not inspired in the originals? We are left with even more problems if we don’t affirm a view of the inspiration of the original manuscripts. Furthermore, why do textual criticism if there was not an inspired original? Textual criticism is based on the fact that there was an original and that we are trying to get back to it.

Some people are concerned about the New Testament because there are corruptions in the manuscripts, which of course there are. But, in terms of the textual problems that we have, the really serious ones probably equal only one percent of the whole New Testament. Someone has compared this to the department of weights and measures in Washington D. C. Apparently, they have the perfect ruler there and the perfect foot. Carpenters around the country have rulers also. They are not as perfect as the one in Washington but they are very near it. To all intents and purposes we can say ‘thus saith the Lord’.

If we are preaching from a text of which there is serious doubt about what the original said, then we have to acknowledge that, just as we have to acknowledge that there may be interpretative problems with some texts that maybe Augustine, Luther, Calvin and Hodge disagreed over. In fact, if we had the original autographs it wouldn’t solve most of our problems. Most of our problems are theological and interpretive, not textual.

The doctrine of inerrancy has been criticized as “‘practically worthless’ because it requires so much qualifying. Andrew McGowan has recently questioned it on those grounds. Is it a fair criticism?

You may be referring to his comments about the Chicago Statement on inerrancy. I do think it is important to make qualifications. All that is to say is that the Scripture is inerrant from the angle of God’s intention through the human authors. If numbers are given in one text, and in parallel texts they are not exactly the same, is that an error? Well it depends on the intention of each particular author. One may be approximating and the other may not be. Some will say that is a qualification and that this qualification is a good example of inerrancy dying the death of a thousand qualifications. I don’t think so.

Even those who hold to a broad view of inspiration, for example the infallibilists, will point to intention, even though they limit that intention to soteric issues or theological issues and not historical ones. I feel very happy with the qualifications that the Chicago Statement makes and I don’t think that those qualifications qualify inerrancy in a way that it ‘dies the death of a thousand qualifications’! In this connection, intriguingly, it is very striking, astonishing really, that Andrew McGowan’s book has hardly any exegesis in it.

Another objection to inerrancy is that it is really a nineteenth-century invention that was forged in the conflict with liberal theology and higher criticism. How do you respond to that claim?

What tells the tale on that are some of the articles and books that have been written that deal with the doctrine of Scripture in the apostolic fathers, the church fathers, the medieval period, the Reformation, and on up to the 1700s. The language used of Scripture throughout the history of the Church is the language of perfection, of not making mistakes, of not making errors and other synonymous terms. John Hannah has edited the book Inerrancy and the Church, in which there are several articles, beginning with the church fathers, that show that the doctrine of inerrancy is traceable long before the nineteenth century.

It is also a typical response to say that inerrancy arose from the Enlightenment, especially as this pertains to the use of reason in understanding Scripture. The response to this has to be the same as with the above discussion of the view of inspiration held throughout Church history.
Posted by Martin Downes at 7:21 AM