Who is really doing "biblical theology"? 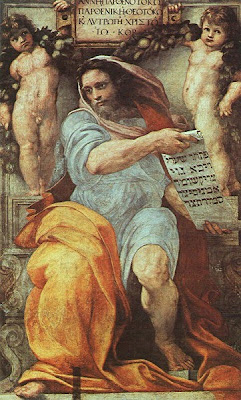 Sometimes, it is alleged, Bible readers read into the text of Scripture ideas that developed at a much later stage, and which, therefore, could not have been known or understood at the time when the text was first written.

The discipline of biblical theology safeguards against this danger by noting the unfolding nature of redemption and revelation, and by tracing the various strands of revelation across the epochs of Scripture.

This discipline liberates us from the myopic approach that obscures the sense of the organic unity of Scripture and its genuine historic focus. Above all it directs our focus upon the Christotelic nature of Old Testament Scripture as the kingdom of God advances and as it is administrated through the covenants.

Some of the richest fields of this Biblical-theological approach that need to be harvested in expository preaching concern the theology of the temple (read G. K. Beale on this).

So far so good.

Sometimes the phrase "biblical theology" is used not only to describe a method of interpretation, but to signify a specific, limited, dogmatic content in Old Testament Scripture. Not that this limited dogmatic content is somehow synonymous with the term or method of "biblical theology." The two should not be treated in this way in an uncritical manner.

However, when it is used in this way biblical theology can actually shut down our interpretative options and restrict our abilities to read the text properly.

In fact, instead of being a helpful method, designed to help us become more sensitive in reading a text in its context (literary unit, book, genre, stage of redemptive history) it too can act as a dogmatic system that imposes itself upon the text. Did we really think that we had become totally free from this error and had become completely emancipated from being myopic?

We think that we are doing "biblical theology" but we have stopped doing exegesis at all. Our method has become every bit as much of a dogmatic framework as the "systematic theology" approach of Bible reading that we have been seeking to avoid.

A good example of this can be found in Meredith Kline's biblical-theological reading of Zechariah's Night Visions (Glory in Our Midst) which Mike Horton describes as bringing a "renewed appreciation for the organic unity and development of redemptive revelation."

Kline cannot be faulted for his sensitivity to the cultivation of a biblical-theological approach to the text of Zechariah. He overtly sets out to see the significance of the night visions "in the light of their identity as part of the overall eschatalogical drama of the kingdom of God from creation to consummation."

Within that approach Kline says that Zechariah's night visions are "a remarkably rich revelation of the Messiah" and that "also conspicuous is the role of the Spirit in relation to the Messianic mission." Furthermore he says:

This Glory of the heavenly Presence of the triune God is indeed the dominant reality in Zechariah's visionary world. And central in the message of the night vision is the gospel promise that this Glory-Presence is vouchsafed to God's people, at last in eschatological fulness.

Consider Kline's assessment of some interpretations of the third night vision recorded in Zechariah 2:


Unable to accept the high mystery of the Angel who describes himself as sent by Yahweh of Hosts (v. 11) and yet speaks as Yahweh of hosts (v. 8) or the reality of the presence and participation of the pre-incarnate Christ in these visionary proceedings, many commentators treat the claims to be sent by God (vv. 8, 9, 11) as parenthetical interjections by Zechariah.

It is alleged that the prophet repeatedly interrupts the divine oracle he is supposedly voicing in order to boast of the future authentication of his prophetic call (cf. Deut. 18:21, 22). But the claims to be sent are thus severed from the attached statements of the purposes of this sending (viz., judgment of the nations and dwelling in Zion) which do not fit Zechariah's role.

Kline's reading of Zechariah 2:8-11 is the same as that of Calvin who wrote of Christ speaking here as God the redeemer (which would of course make it the Calvin-Kline view).

His point? An interpretation that diminishes the Christological and Trinitarian language of the text (the LORD dwelling in the midst of his people sent by the LORD of Hosts) has not exegeted the text in a sufficiently nuanced way.

Curiously Barry Webb's fine commentary (in the IVP Bible Speaks Today series) ignores even the possibility that the second person of the Trinity is the speaker and merely treats the confirmation of sending as Zechariah's interjection about his prophetic office. Calvin on the other hand wrote that "this address cannot be applied without perversion to the Prophet."

Email ThisBlogThis!Share to TwitterShare to FacebookShare to Pinterest
Labels: zechariah