A makeover and some mini Exodus motifs 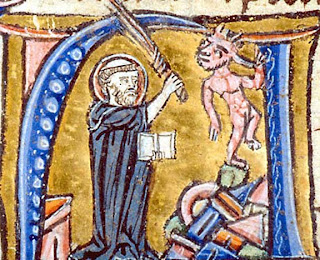 My thanks to Dave Bish for restoring the Against Heresies banner which had disappeared, and which he had designed in the first place.  He has also, very kindly, upgraded some features and very much improved the design of the blog.  So hats off to him.

The banner itself, which would look great on a t-shirt or a mug, is an adaptation of "Augustine refuting heretics."  And as I'm currently reading Augustine's De Trinitate I will, in due course, post some highlights.

The early chapters of Exodus have some remarkable mini-Exodus motifs, such as the son saved from the waters of judgement and the pursuit of his enemies, a real foretaste of what will happen later in the book.

There are also some NT miniatures.  Moses, of course, is the saviour rejected by his people (Exodus 2:11-14) but welcomed by the Gentiles (2:15-20).  A wonderful glimpse (in fact a type) in miniature of the Christ that Moses both spoke of, served and suffered for (see Stephen's point about God's people rejecting their Saviour in Acts 7:23-53, and the writer to the Hebrew's point about Moses regarding disgrace for the sake of Christ as of greater value than the treasures of Egypt in 11:26).
Posted by Martin Downes at 1:14 PM