Euan Murray interviewed in The Guardian 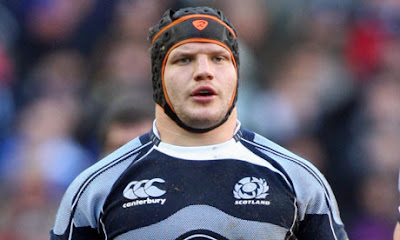 Euan Murray is the Scottish tighthead prop, and a British Lion. He's also a Christian and will not be turning out for his country this Sunday when they play France in their opening Six Nations game.

The Guardian newspaper has an interview with him about why he's not playing and in that interview he explains the gospel:

He suggests that the path many professional sportsmen follow is "rotten". He tries to explain. "All the shiny bubbles," he says, holding out his big hands and shaking his head in sadness. "The money, the possessions, the fame, the great elusive relationship – all bubbles that appear perfectly spherical, all the colours of the rainbow. They're bright and shiny and light as a feather, and you chase them because it's good fun, but the minute you get them they burst and they're empty." He pauses. "I'd had enough of chasing bubbles."

What were the "bubbles"? "The attraction of all the glamour and glitz that society puts up on a pedestal and says is the be all and end all. All the tinsel, you know? The success. There are many ways of measuring success – it could be in popularity, the funniest guy, or the guy with the best scores, it could be money, it could be getting the best-looking girl, lifting the most in the gym, having the best clothes, it could be being the best rugby player in the world." He trails off. "It's not wrong to be funny, or have a great-looking wife. It's not wrong to have money and to want to be the best player in the world, but if that is your idol then that is wrong."

In finding God, he says, Murray was able to change his path. He picks up a mug of tea and a glass of water and holds them out in front of him. "This is the tea, all dirty and horrible, this is me, yeah? That's Jesus," he says, motioning to the water. "Pure. He's taken that filth upon himself and before God he says, 'Punish me for it'. He's been punished and look what he's given me. That perfect goodness in the eyes of God. He's declared me innocent." He swills the dregs of the tea and smiles. Can it be that simple? "I'm ashamed of the things I've done. Of course I am. But I'm thankful I have a saviour. He's saved me from that lifestyle. He's given me a new life."

You can read the whole thing here
Posted by Martin Downes at 5:01 PM

Email ThisBlogThis!Share to TwitterShare to FacebookShare to Pinterest
Labels: interview

Amen. The "bubbles" analogy is perfect.

I will be praying for Mr. Murray's influence on his teammates and countrymen.

May we see revival in Scotland!