After the Lord Mayor's show 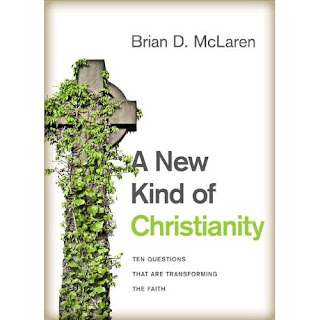 Brian McLaren's A New Kind of Christianity is not released by Amazon in the UK for another two days, but already reviews are coming in thick and fast from the other side of the pond. McLaren has been an influential voice in the last five years and his writings hve been big sellers, so it is important to interact with him.

The flavour of the book, judging from the reviews, puts a premium on discussion and dialogue and not on definitive answers, and yet at the same time polices that discussion so that the Greco-Roman Platonic corruption of Christianity is unmasked and barred from the conversation. One wonders if Adolf Harnack's ghost was peering over Brian's shoulder as he sat at his keyboard.

But as we are so behind the Americans and Canadians in getting the book that any review of mine will be appearing well after the Lord Mayor's show has ended, a fact that diminishes my willingness to write one. All I can say to those across the pond is at least we got to read Pierced For Our Transgressions before you did. Hey we even had Tom Wright's book on justification before you. So there.

In addition to the ongoing review by Mike Wittmer, he is now up to Question 5 "What is the Gospel?" (part 1 and part 2) there is this review by Tim Challies, and there is to be a three part review by Kevin De Young.
Posted by Martin Downes at 5:07 PM