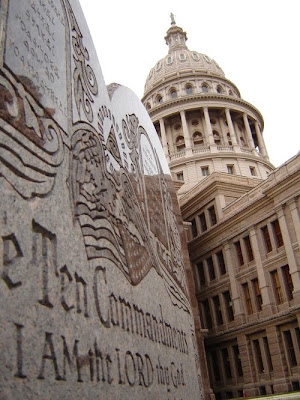 My old friend David Strain has recently been interviewing Darryl Hart. You can check out part one and part two. In the latest installment they discuss the two kingdoms. Here's a taster:

1.Would you briefly state the doctrine of the Two Kingdoms (2K) for us?

I should have a handier definition than I do. I guess I would describe it this way.The church is the kingdom of the Lord Jesus Christ (WCF 25.2) outside of which there is no ordinary possibility of salvation. Communicant and non-communicant church members are part of that kingdom, the kingdom of grace (which is different from the kingdom of Satan and which is playing a part in hastening the kingdom of glory – the Shorter Catechism speaks of these three kingdoms, Satan’s, grace, and glory in explaining the second petition of the Lord’s prayer.

The kingdom of the civil realm has its own rules and sovereignty, and has criteria for membership that vary in places and across time.

Confusing forgiveness and justice is a huge example of category confusion. Granted, the forgiveness the church administers is premised on the justice that Christ underwent in suffering for the penalty of sin. And granted the magistrate’s ideals of justice are a type of the eschatological justice that will be administered on the Last Day.

In other words, you can’t understand the church or the state apart from God’s righteous standards, that is, his law.

But the church is involved in the work of reconciling God and man through Christ. The state has no direct role in that project of reconciliation. It may create and sustain an environment in which the church can minister. But the aim of the state is fundamentally different from that of the church.

Read the whole thing
Posted by Martin Downes at 7:45 AM

Email ThisBlogThis!Share to TwitterShare to FacebookShare to Pinterest
Labels: Interviews

I have never heard the 2 Kingdoms taught by a UK reformed / conservative evangelical leader (but I may not have been listening) - I discovered all this from the likes of Daryl Hart and White Horse Inn. I wonder then if the fruit of this silence is the Kuyperian (transforming the culture theology) dominance here.

Although personally I wonder if this owes more to our leaders here struggling to come to terms with our minority / powerless status here in the UK. Something which to me the 2 Kingdoms fits far better.

My experience has been the same as yours. In fact the first thing that I read on the 2Ks was Darryl Hart's "Recovering Mother Kirk" during a stay at Gordon-Conwell seminary.

The other factor with the UK, is that we are the home of exhibit A in the case for 'transforming the culture' ... William Wilberforce.

The irony is that didn't John Newton discourage him from becoming a minister and he did his work in this from 'outside' the church. Classic 2K ...