John Calvin in the Valley of the Shadow of Death 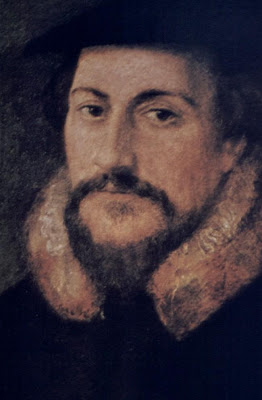 The following article (based on his conference address from earlier this year) by Garry Williams has been posted on the Banner of Truth site. It was a privilege to hear it and I am sure that you will benefit from reading it. Calvin, as the author says, was a suffering Reformer.

Calvin married Idelette de Bure in 1540 and from the little we know they appear to have been very happily married. Yet their only son Jacques died shortly after he was born on 28 July 1542. Calvin expressed his grief to Pierre Viret: ‘The Lord has certainly inflicted a severe and bitter wound in the death of our infant son. But he is himself a Father, and knows best what is good for his children.’ In 1545 Idelette herself became ill, and in March 1549, after just nine years of marriage and with Calvin still under forty, she died. Calvin expressed his grief in a letter to Viret just over a week later:

Truly mine is no common source of grief. I have been bereaved of the best companion of my life, of one who, had it been so ordered, would not only have been the willing sharer of my indigence, but even of my death. During her life she was the faithful helper of my ministry. From her I never experienced the slightest hindrance. She was never troublesome to me throughout the entire course of her illness; she was more anxious about her children than about herself.

A few days later he wrote to Farel: ‘I do what I can to keep myself from being overwhelmed with grief.’