Proof-texting: A form of theological shorthand 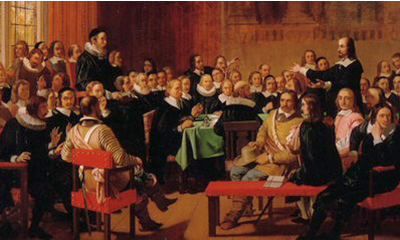 I am currently working on a version of the Shorter Catechism with the proof-texts taken from the ESV. The process is slow and detailed and wonderful. I hope that the result will be of use to individuals and churches.

Allow me to make three points about proof-texts:

1. We should never assume that the use of proof-texts implies a cavalier attitude toward those texts in their contexts (unit of thought, chapter, genre, redemptive-historical location etc.)

2. We should never assume that the use of a proof-text implies a method divorced from responsible exegesis. We should never assume that we have no need to reach for the best commentaries on those texts, that grammatico-historical exegesis is irrelevant, that linguistic study is to be suspended. They should be offered and received in full knowledge and responsible use of all available interpretative tools.

3. We should assume the fundamental unity of Scripture, the "consent of all the parts," because of the superintending work of the Holy Spirit.

When the Westminster Assembly presented the Confession of Faith to Parliament, December 3rd 1646, it was further required of them that the "Assembly should attach their marginal notes, to prove every part from Scripture." Warfield noted that the "proof-texts for both Catechisms occupied the Assembly from Novemeber 30, 1647, to April 12, 1648, and were presented to Parliament April 14, 1648."

A few years back a good friend pointed me to John Frame's short section on proof-texting in The Doctrine of the Knowledge of God. I found it helpful, I hope that you will too:

"Proof-texting" has become almost a term of reproach today, but that was not always the case...A proof-text is simply a Scripture reference that is intended to show the basis for a particular theological assertion.

The danger in proof-texting is well known: proof-texts are sometimes misused and their contextual meaning distorted in an attempt to use them to support teachings they do not really support.

But it has never been shown that texts are always or necessarily misinterpreted when they are used as proofs for doctrines. And after all has been said, theology really cannot do without proof-texts.

Any theology that seeks accord with Scripture (that is, any theology worthy of the name) has an obligation to show where it gets its scriptural warrant. It may not claim to be based on "general scriptural principles"; it must show where Scripture teaches the doctrine in question.

In some cases, the theologian will display this warrant by presenting his own contextual exegesis of the relevant passages. But often an extended exegetical treatement is unnecessary and would be counterproductive.

The relationship of doctrine to text might be an obvious one once the text is cited (e.g., Gen. 1:1 as proof of the creation of the earth), or it may simply require too much space to go over the exegetical issues in detail.

To forbid proof-texts would be to forbid an obviously useful form of theological shorthand.

that's very helpful. Praying for you today as you do it. I think that the mistrust of prooftexting, possibly resulting from evidence of bad practise, led to a similar mistrust of single text preaching. Where 30 years ago you could find excellent examples of people preaching one verse, it has almost disappeared today. Instead literary-historical contextual preaching is considered by many to be the only legitimate form, with anything else being bad preaching by default.

Hope your arm is getting better

Thanks for praying. My arm continues to improve, but it will be a little while until I am able to return to the circus.

I'm sure that you are right about single text preaching. Hard not to do that with all the weighty, condensed, statements in the epistles.

And less opportunities to do it....? i.e. the trend towards single Sunday meetings.

Interesting to hear Keller say he took a different approach in a settled congregation (more like one verse preaching) and in an urban culture (larger chunks). My sense is that both have a part to play.

It can also be useful (and INCREDIBLY old fashioned) to have a text on which to hang a sermon. So, as I preach Luke 8.26-39 focusing on the demonic world, might people not be helped if I start and finish with 1 John 3.8?

I'm reworking the Shorter Catechism myself! I would love to see what you've done up to this point and I would be glad to share my work!

I'm reworking the Shorter Catechism myself! I would love to see what you've done up to this point and I would be glad to share my work!

Oh - my email is lordyhwh@rock.com.

Have you finished your work on the Catechism yet? I would love to see what you've done! You can email me at lordyhwh@rock.com