Liberalism: A warning from history (1) 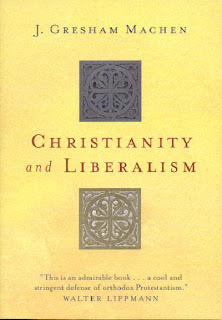 The following is an edited version of an article that appeared here almost a year ago:


How is it possible for sound evangelical churches to move so quickly from the truth into error? And how is it possible for a church blessed with many eminent preachers and scholars to be succeeded by men who lose the gospel? These questions are not theoretical. We will consider them in the light history.

R. A. Finlayson the late professor of Systematic Theology in the Free Church College in Edinburgh, wrote a helpful short article on "How Liberal Theology Infected Scotland." Finlayson thought that the infiltration of Liberal theology into the Church was due to wrong priorities by the leaders. He wrote:

Not content with opening three colleges, in Glasgow, Edinburgh and Aberdeen...her theological students would not deem their course complete, or their standing in the Church assured, without a postgraduate course of one or more years in one of the more famous Colleges in Germany.

Reading this assessment reminded me of the words of Archibald Alexander to the young Charles Hodge earlier in the nineteenth century. Hodge has been given leave by Princeton Seminary to spend two years studying in Europe. As well as developing his language skills, Hodge would become acquainted with biblical criticism. Alexander cautioned him:

Remember that you breathe a poisoned atmosphere. If you lose the lively and deep impression of Divine truth, if you fall into scepticism or even into coldness - you will lose more than you gain from all the German professors and libraries.

At the start of the twentieth century a similar situation was faced by the young Gresham Machen, who later founded Westminster Seminary. As he studied in Marburg, Germany, under the renowned Liberal scholar Wilhelm Herrman, Machen said that Herrman believed hardly anything essential to Christianity. Yet here was a man who at the same time exuded an incredibly impressive piety. Although he rarely spoke of the profound spiritual struggle that he went through in Germany, years late,r one of Machen's students recalled him saying that:

The great Dr. Herrman presented his position with such power I would sometimes leave his presence wondering how I could ever retain my confidence in the historical accuracy of the Gospel narratives. The I would go to my room, take out the Gospel of Mark and read it from beginning to end in one sitting--and my doubts would fade. I realized that the document could not possibly be the invention of the mind of a mere man. (Calhoun, Princeton Seminary: The Majestic Testimony, p. 230)

It was a remarkable act of mercy that kept the young Charles Hodge, and the young Gresham Machen, from caving in to the errors of their teachers. Embracing the truth, and remaining sound in the faith, cannot ultimately be attributed to our own powers. How different, would the history of Princeton Seminary been if the poison of Liberalism had infected the thinking of Charles Hodge. Perhaps we can see what it would have looked like by observing, in the next post, the influence of some notable Hebrew scholars in Scotland.

Posted by Martin Downes at 2:07 PM