The Larger Catechism on Christ's ascension and heavenly session 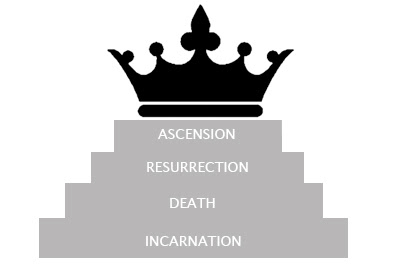 Q. 53. How was Christ exalted in his ascension?

A. Christ was exalted in his ascension, in that having after his resurrection often appeared unto and conversed with his apostles, speaking to them of the things pertaining to the kingdom of God, and giving them commission to preach the gospel to all nations, forty days after his resurrection, he, in our nature, and as our head, triumphing over enemies, visibly went up into the highest heavens, there to receive gifts for men, to raise up our affections thither, and to prepare a place for us, where himself is, and shall continue till his second coming at the end of the world.

Q. 54. How is Christ exalted in his sitting at the right hand of God?

A. Christ is exalted in his sitting at the right hand of God, in that as God-man he is advanced to the highest favor with God the Father, with all fullness of joy, glory, and power over all things in heaven and earth; and doth gather and defend his church, and subdue their enemies; furnisheth his ministers and people with gifts and graces, and maketh intercession for them.

A. Christ maketh intercession, by his appearing in our nature continually before the Father in heaven, in the merit of his obedience and sacrifice on earth, declaring his will to have it applied to all believers; answering all accusations against them, and procuring for them quiet of conscience, notwithstanding daily failings, access with boldness to the throne of grace, and acceptance of their persons and services.

Q. 56. How is Christ to be exalted in his coming again to judge the world?

A. Christ is to be exalted in his coming again to judge the world, in that he, who was unjustly judged and condemned by wicked men, shall come again at the last day in great power, and in the full manifestation of his own glory, and of his Father's, with all his holy angels, with a shout, with the voice of the archangel, and with the trumpet of God, to judge the world in righteousness.

Posted by Martin Downes at 7:32 PM