Alec Motyer on The Angel of the Lord (1) 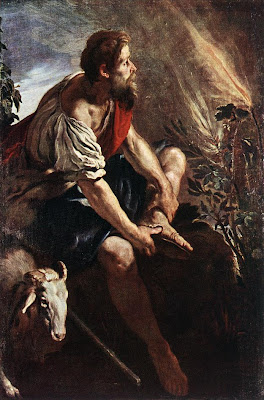 Now Moses was keeping the flock of his father-in-law, Jethro, the priest of Midian, and he led his flock to the west side of the wilderness and came to Horeb, the mountain of God. 2 And the angel of the LORD appeared to him in a flame of fire out of the midst of a bush. He looked, and behold, the bush was burning, yet it was not consumed. 3And Moses said, "I will turn aside to see this great sight, why the bush is not burned." 4When the LORD saw that he turned aside to see, God called to him out of the bush, "Moses, Moses!" And he said, "Here I am." 5Then he said, "Do not come near; take your sandals off your feet, for the place on which you are standing is holy ground." 6And he said, "I am the God of your father, the God of Abraham, the God of Isaac, and the God of Jacob." And Moses hid his face, for he was afraid to look at God.

Alec Motyer makes the following remarks in his commentary on Exodus 3:

Exodus describes Moses' encounter with God as the angel of the LORD appearing to him. When we look at the other references to 'the Angel of the LORD' or 'the Angel of God', we find that he is someone very special indeed. A. B. Davidson put it this way: 'This Angel is not a created angel--He is Jehovah Himself in manifestation...identical with Jehovah, although also different.'

Angels in general, writes Davidson, can represent one aspect or another of the divine nature but 'in the Angel of the Lord He is fully present.' Malachi 3:1 is a case in point, where 'The Lord (adon, the Sovereign)' and 'The messenger/Angel of the covenant' are in apposition: literally, 'Suddenly, the Lord whom you seek, the Angel of the covenant whom you desire, will come to his temple. Behold! He is coming! The LORD (yhwh) of hosts has said it!'

The view that this Angel was indeed the pre-incarnate Christ is definitely no heresy--it is perhaps the minority position to disagree. So please do be careful when you label people heretics. Alec Motyer is one of the finest and beloved scholars the church has been blessed with in our generation. Thanks.

Thank you for your comment. I have several posts on the Angel of The Lord being the pre-incarnate Christ. Not sure why you would think that I was being in any way critical of Motyer. I have quoted him in this post approvingly.