Liberalism: A warning from history (3) 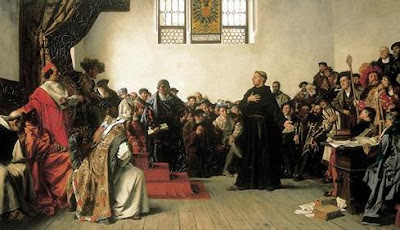 Pray for the seminaries

We ought to pray for the preservation of the gospel in the seminaries. "Holding fast to sound words" is an apostolic command, as the Paul makes clear to Timothy (2 Timothy 1:13-14). Seminaries are for churches, and not for the sake of the academic world.

We ought to pray specifically that men would not be ashamed of Jesus and his words (Mark 8:38).

We ought to pray for clarity to think through the consequences of compromise, and courage to fight the right battles.

The older Liberalism is all but dead. It could never produce offspring. But the same tendency to make the Word of God subservient to the ruling ideas of the age is still with us. If we get this wrong in the coming generation, with the battles that we are facing today, the effect on the churches will be devastating.

We need to remember that errors that come from the professors, to the pulpits, and into the pews can travel very quickly, as Galatians 1 makes clear.

Martin Luther saw the issues clearly in his own day, his oft quoted words are still as relevant as ever at the start of the twenty-first century:

If I profess with the loudest voice and clearest exposition every portion of the Word of God except precisely that little point which the world and the devil are at that moment attacking, I am not confessing Christ, however boldly I may be professing Him. Where the battle rages there the loyalty of the soldier is proved; and to be steady on all the battle front besides, is mere flight and disgrace if he flinches at that point.

In the nineteenth century many Liberals started out as evangelicals, men who affirmed their belief in the Reformation doctrines of the Westminster Confession. Many sought to reach a modern culture that they knew was departing from previous Christian influences. They tried to hold together new views that were destructive of historic Christian doctrine, a fervent spirituality, and an evangelistic concern. But when they lost their grip on the truth their spirituality and evangelistic concerns merely masked the presence of another gospel, which was really no gospel at all.
Posted by Martin Downes at 6:27 AM