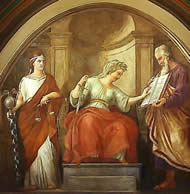 This is because heresy is something usually discussed when other theological work has already been done. That is, once our most important convictions and presuppositions have been worked out. Then it becomes clear that some theologies logically cannot be at peace with each other on questions of ultimate importance. They are antithetical concerning the nature of the gospel. Unless this point is recognised from the start the conversation about defining heresy will never really get going.

Labelling yourself a heretic is a rhetorical device. It will get you a hearing just because it sounds sensational. The heretic is the outsider, the unconventional thinker, the individual against the system, the daring soul who refuses to tow the line and maintain the tradition of the elders. But underneath all that rhetoric every heretic believes themselves to be orthodox. Calling someone a heretic is a consequence of recognising their fundamentally different position on the question of authority and/or beliefs of first importance.

I am considered to be a heretic. I believe that there is only one living and true God, that there are three persons in the Godhead and that each of these persons is fully God, co-equal and co-eternal. I believe that Jesus is both God and man, having two natures in one person. That though he was and is God over all blessed forever, for us and for our salvation he became man and suffered and died and rose again. I believe emphatically in the full deity and distinct personhood of the Holy Spirit. I believe all these things to be the true teaching of the Bible, the Word of God written, totally trustworthy in all matters of belief and behaviour. But as far as a Unitarian, or a Jehovah's Witness, is concerned my belief is heretical. I refuse to recant my beliefs and therefore I am judged to be a heretic.

Furthermore I am an evangelical and believe that I have been justified by God's grace alone, through Christ alone, and that I have received this by faith alone. Sinful and guilty I am, but Christ's righteousness is counted as mine. Because I hold to this conviction, the anathemas of the Roman Catholic Church, as articulated in the Canons of the Council of Trent rest upon me. I am an accursed heretic judged by that standard. That's the perceived seriousness of the error involved.

Heresy is no ordinary kind of error. Heresy is error on the most essential beliefs. It is the denial of one or more of those beliefs. Heresy is the choice to deny “the faith” and to replace essential saving truth with something else. However much it may look and sound like the real thing, it is in fact something quite different. But what is “the faith” that is being denied and replaced? It is the thing that has to be defined before you can recognise what counts as heresy.

So who decides what counts as heresy? Who determines the boundaries of acceptable belief? Who has the right to referee on matters of error? Now to answer those questions would inevitably involve giving an explanation, and defense, of the entire biblical worldview. Debating heresy happens once questions of truth, authority, and the doctrines of first importance have been determined. These things need to be defined first, and then we can get to the definition and details of heresy.

Posted by Martin Downes at 2:39 AM