Schaeffer on the Body Snatchers 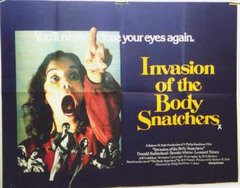 Here is Francis Schaeffer on the recurring theme of alien worldviews using the church as a host. Hiding beneath the surface of Christian vocabulary, and coming out of the mouths of preachers and seminary professors, is unbiblical philosophy. In Schaeffer's day it was old and new forms of liberalism. See previous posts on The Invasion of the Body Snatchers:

The Church Before the Watching World, Complete Works volume 4, p. 118

"The new theology is simply modern thought using religious words...Historic Christianity and either the old or the new liberal theology are two separate religions with nothing in common except certain terms which they use with totally different meanings".

"I would repeat that liberal theology is only humanism in theological terms" A Christian Manifesto, Complete Works volume 5, p. 442

If that has been the case in recent times with modernism/liberalism, and true in other eras of the Church, then shouldn't the present case for postmodernising the faith by viewed with deep suspicion? Isn't the onus on those who wish to welcome postmodernism to show that it isn't the latest move in a long tradition of subverting orthodox Christian belief?
Posted by Martin Downes at 5:11 PM