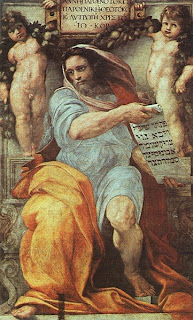 Now I want to remind you, although you fully knew it,
that Jesus,
who saved a people out of the land of Egypt,
afterward destroyed those who did not believe.
Jude 5 (ESV)
Most contemporary evangelicals adopt an approach to the doctrine of God in the Old Testament that is functionally modalist, or unitarian.  God is regarded as a person, with only a vague inkling, insufficient for its time, that within the Godhead there is a plurality of three distinct divine persons.

The Word of God and the Wisdom of God are taken to be personifications rather than persons, and the descriptions of the Spirit in personal terms (being grieved, instructing, and giving rest, see Neh. 9:20; Isa. 63:10, 14) are not given sufficient attention, even though they are every bit as important in establishing the personal nature and agency of the Spirit as the Pauline texts in 1 Cor. 2:13 and Eph. 4:30.  It is surely undeniable that in the Old Testament the work of the Spirit is the work of a divine person.

In the great Isaianic prophecies concerning the Messiah, who is he anointed with (11:1-3)?  Who sends the Messiah and the Spirit (42:1; 48:16; 61:1)?  Can we afford to think of this Spirit anointing in vague or impersonal terms when Isaiah also tells us that the Spirit give the people rest and that they grieved him in the wilderness (63:10-14)?

It may be more helpful to think of these great Isaianic prophecies as movie trailers for the gospels, giving us glimpses ahead of the release date, of the words and works of the principal actors in the drama of redemption.  The prophets were not telling a cryptic tale about the denouement of God's dealings with Israel, they were looking for the Christ, anointed with the Spirit and sent by God.  They had the privilege of projecting onto the screen the snapshots of revelation that foresignified Christ to come.

On the subject of Christ in the Old Testament here, again, is Irenaeus in Against Heresies:


For he who has brought in the end [of the law] has himself also brought in the beginning; and it is he who does himself say to Moses, "I have surely seen the affliction of my people which is in Egypt, and I have come down to deliver them;" it being customary from the beginning with the Word of God to ascend and descend for the purpose of saving those who were in afflication. (4.12.4)


But when he terms the disciples "the friends of God," he plainly declares himself to be the Word of God, whom Abraham also followed voluntarily and under no compulsion, because of the noble nature of his faith, and so became "the friend of God" [Jas. 2:23].  But the Word of God did not accept of the friendship of Abraham, as though he stood in need of it, for he was perfect from the beginning ("Before Abraham was," he says, "I am"), but that he in his goodness might bestow eternal life upon Abraham himself, inasmuch as the friendship of God imparts immortality to those who embrace it." (4.13.4)

In this manner, therefore, did they also see the Son of God as a man conversant with men, while they prophesied what was to happen, saying that he who was not come as yet was present, proclaiming also the impassible as subject to suffering, and declaring that he who was then in heaven had descended into the dust of death. (4.20.8)

And the Word spake to Moses, appearing before him "just as one might speak to his friend." (4.20.9)

However, it was not by means of visions alone which were seen, and words which were proclaimed, but also in actual works, that he was beheld by the prophets, in order that through them he might prefigure and and show forth future events beforehand. (4.20.12)

Posted by Martin Downes at 3:46 PM

Do you think part of the problem is that Christians hesitate to read/preach the OT redemptive-historically, because they want to "honor the OT on its own terms" (i.e., mere grammatical-historical interp.)?