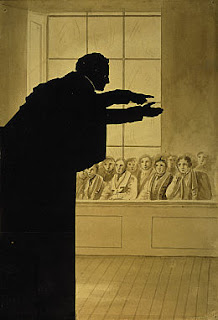 This is a follow up to yesterday's tongue in cheek post about why it appears that there aren't that many good preachers in the former British colonies now known to all as the United States of America.  Tongue in cheek because I know that there are plenty of good preachers, but that isn't necessarily reflected in the remarkably small pool of speakers from which Reformed conferences fish.  In actual fact there are several pools, reflecting different shades and networks of the Reformed and Calvinistic world, and some speakers move more naturally than others from pool to pool.

At its best this does reflect the fact that whilst all word ministers are gifts of grace to the church we recognise that God raises up some men and ministries to become particular blessings to the whole church.  These men may or may not be the ones invited to all the conferences, but it would be wrong to despise such gifts and to succumb to the tall poppy syndrome.  Furthermore, not all ministers of the word have the gifts for such events, but some do and we benefit a great deal from God's work in them and through them.

At its worst it is hard to see how a celebrity preacher culture is any different to the myopic vision about Christian leaders grossly exhibited by the Corinthians.  As the Puritan Richard Baxter once said "I am a pen in the hand of God, and what praise is due to a pen?"  Here in old Blighty whilst there is often little risk of an over the top appreciation of conference speakers I do think that we have something to learn from some of our American cousins about open warm appreciation of preachers.

I have been in enough conference planning meetings to know that there are several factors when it comes to selecting speakers.  No doubt there is the financial risk and fear of small numbers if we don't go for the big name who will draw a crowd.  The fact of the matter is that many conferences can make decisions because of financial pressures.  The logical long term effect of this is to reduce the pool of well known speakers even further and to perpetuate the idea that the already recognised big names are the only ones worth going for.

I also know that some conferences deliberately seek to give both opportunities to younger ministers and exposure to a wider audience, or to introduce some speakers known to the organisers to a new constituency.  One of the blessings of the latter is the fostering of real catholicity.  All of this is good.  The problem lies in the fact that so often our choices are coloured by our own prejudices and preferences, our spiritual immaturity and climate, and we run the risk of feeding unworthy agendas and missing out on real blessings.

Whether we like it or not the danger of ubiquitous conferences, live streamed and available to download, is that a blessing can swiftly become a curse.  I am glad to live in an age where online riches are so freely available, but the big name, big budget, big audience conference has fast become the main event.  For all the antipathy Calvinists may feel about liturgical church calendars we have one of our own, the para-church conference circuit.  Is that a fair point?  Look at the coverage given to the matter in the blogosphere.

Besides which there are probably far too many conferences anyway, and far too many that subtly undermine local churches even if they say that their mission is to serve 'The Church'.  A feat that is easy to do in the abstract but which bears almost no relation to honouring real churches apart from mega ones.
Posted by Martin Downes at 3:37 PM

Gary said...
This comment has been removed by the author.
3:30 PM

Yes, I agree. It isn't a worldly thing, necessarily, to use 'big names' that will draw a crowd to a conference - after all, conferences are subject to the laws of economics. More should be done, though (and it's easy!) to add in 'new names': if a conference has 4 or 5 morning sessions done by the 'big name' and 3 or 4 evening sessions, then at least one of those evening sessions should ALWAYS be given to a relative unknown. One can then be given to an other 'old trusty', and the remaining ones used at the discretion of the organisers. If they had a newcomer a couple of years ago whose ministry was blessed, bring him back. If it happens again, mark him down to use twice very soon.
One thing that I've noticed: I was converted in the 1970s; those speakers that were being used at conferences then are (unless they are dead or fallen) still the speakers being used today. When I queried this on a conference I used to help organise, I was told 'conferences are much bigger now; then we could use men without experience, now we can't.' Rubbish. It's the old boys keeping control, and when they're dead and gone we'll have virtually no-one left who can command a crowd. (Who said that? Get off my contribution!)