Sola Scriptura: The Protestant Position on the Bible 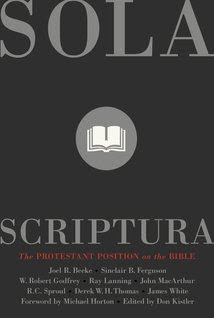 Sola Scriptura, the formal principle of the Protestant Reformation, is essential to genuine Christianity. Yet this doctrine is under assault today as never before, both from outside and and inside the church. In manifold ways, the idea is put forth that the Bible is inadequate for the needs of modern man. Such suggestions represent an attack on the very foundations of the Christian faith.

In this book, several leading Reformed pastors and scholars unpack the meaning of the doctrine of sola Scriptura ("Scripture alone"). They also explain where the attacks on the Bible are coming from and show how those who accept the Bible as God's inspired Word should respond. In building a new case for the Bible as divine revelation, they show what a treasure the Scriptures are and call believers to a new commitment to the reading and studying of its contents.

It's part of the Ligonier Thanksgiving Sale, which has, I think been extended until Friday.

Thanks for mentioning that