"Remember, remember..." An interview with Mike Reeves on the Reformation, part 1 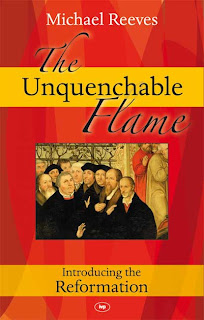 Mike Reeves is the theological advisor for UCCF:The Christian Unions, the power behind the throne for Theology Network, and the author of The Unquenchable Flame: Introducing the Reformation (IVP). UK readers can get the book for the bargain price of £7.20 (that includes p & p) here. A US edition of the book will be out on 1st April 2010 and will be published by Broadman & Holman.

Mark Dever says that it is "quite simply, the best brief introduction to the Reformation I have read" and Gerald Bray says that it "will stir the heart, refresh the soul and direct the mind towards a deeper understanding of our faith."

I recently asked Mike some questions about the book.

Downes: Why did you write the book?

Reeves: Discovering the Reformation was a real turning point for me personally. It was Luther I found first, and when I did I saw gospel-clarity of a sort I had never seen before. I didn’t know it, but at the time I was pretty hazy on great doctrines like justification, and reading Luther was just life-changing. So I wanted to share what was for me a profound gospel discovery.

And I wanted it to be a bed-time story of a book, an easy read that anyone could pick up and enjoy, but through which they’d come to appreciate some of the key lessons of the Reformation: justification, the supremacy of the Bible, how (and how not) to reform churches and so on. Primarily, then, I wrote it for every Christian; but I also realised that a history book feels like safe reading for non-Christians, and I hoped that it could be the sort of book Christians could give to their non-Christian friends – harmless in feel, but full of the gospel.

Downes: Why is it important for us today to know about the Reformation?

Downes: Is the church scene today in any way like the church before the Reformation?

Reeves: There are, of course, substantial differences, but I have found teaching people about medieval Roman Catholicism extremely helpful pastorally. And that’s because the religion found there is the sort of distorted gospel of works rather than grace that Christians most naturally slide into. So in that sense there are great similarities, and they are worth being aware of to see how starkly the Reformers’ message contrasts with it.

Not only that, but there are theological camps today -- even deep within Protestant circles -- that stray into worringly similar territory. When, especially, good works are spoken of as being in any way a cause, rather than a consequence of our justification, I see great similarities.

Downes: What dangers are we in if we think that the Reformation is irrelevant?

Reeves: Well, take that essential issue of whether our works are a cause or a consequence of our justification: if we soft-pedal that by saying it is beside the point or that we don’t want to nit-pick over such doctrinal minutiae, we will see precisely the pastoral nightmares Luther experienced. Thinking he had to win God’s favour, Luther saw nothing in God to love. He thus confessed that, before his Reformation discovery, he hated God. And with his security dependent on his own performance he lived in constant terror of death. He lived the very polar opposite of Paul’s ‘For me to live is Christ, and to die is gain.’

But my worry is that we will see more and more such pastoral train-wrecks because of the widespread fear of doctrinal precision. Of course the sinful human heart always fears the harsh light of divine revelation and prefers the vagueness of theological waffle, but there is something in our age that seems especially prone to avoiding doctrine. And yet if the Reformation shows anything, it is the liberating power of good doctrine.

The Reformation also shows how easily people misunderstand how to go about reforming the church. Some, for example, thought that Reformation was essentially about getting rid of traditional ways or traditional beliefs, and those misunderstandings proved catastrophic. Ignorance of how church reformation can misfire is simply dangerous.

Posted by Martin Downes at 1:13 AM