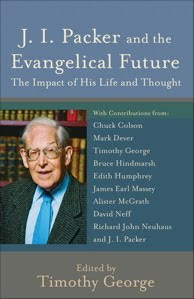 If you have not spotted this yet you may be interested in reading Paul Helm's recent post on J. I. Packer's Evangelical Anglican comprehensiveness and it's relevance to the rupture in his working relationship with Martyn Lloyd-Jones.

It should also be noted, because you will miss it in all the printed assessments of these matters, that Packer continued to have very warm personal relationships with those in the so-called "Lloyd-Jones circle."

Here is an extract:

One reason for putting together this piece is to redress the present imbalance that may arise as a result of the state of the of evidence. Dr Lloyd-Jones is dead, and his several defenders have access to the full range of his correspondence.

Dr Packer is alive, and quite naturally his personal correspondence, and maybe other documents, are not available in the same way, even though as we shall see there are published fragments of letters and addresses.

The second reason is that somewhat surprisingly, as far as I know, Packer has never published an account of his own outlook specifically addressed to those who were and are pained by his stance.

I believe it is possible to offer a perfectly understandable explanation of this failure to be convinced, one that is in line with full Christian integrity, but it rests on grounds that are somewhat unfamiliar to the people who level the charge of compromise: How can a man organise a Puritan conference and not himself be a Puritan?

What follows is very largely a defence of J.I. Packer’s position vis-à-vis Anglicanism to the extent that it attempts to convey the coherence and strength of that position as (I believe) he sees it, and the bearing that these reasons have on ‘principles of co-operation’. In the next post I shall make some remarks on these reasons.