Heresy: a history of defending the truth 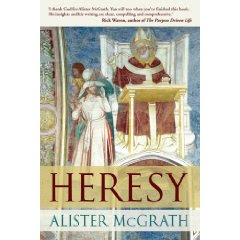 Guy Davies draws my attention to the soon to be released Heresy: a history of defending the truth by Alister McGrath and published by SPCK (with a foreword by Rick Warren). I will look forward to reading it.

But here's a curious line from the Amazonian blurb:

McGrath's provocative thesis is that the categories of heresy and orthodoxy must be preserved by the church today.

Go on, read it again, only this time slowly. Provocative? Would that not have received a blank stare, or a furrowed brow, from the apostles, early church fathers, medieval schoolmen, reformers, and the puritans?

The disappearance of the categories of orthodoxy and heresy is something of a litmus test for churches. It indicates the presence, or absence, of seriousness about the living God. It discloses whether we are humble pupils being schooled by Scripture, or whether the locus of authority has shifted from the Word of God to the subject, or the community. As one writer expressed it "A church that cannot experience heresy probably doesn't have any commitments, any identity, any character. The possibility of heresy is simply the negative expression of a church's having a confession of faith."

I suppose that it is a provocative thesis if you have allowed the church to be overrun by theological relativism, but not if you take the New Testament seriously. What else are you supposed to do with Galatians 1 or 1 John? Who knows, perhaps the book is intended to be a persuasive tract for those who have abandoned the very categories of orthodoxy and heresy. If that is so it is much needed.

Thomas C. Oden made the following helpful remarks about the categories of orthodoxy and heresy in his article "Can we talk about heresy?" (April 1995 edition of the Christian Century):

An interloper who steals property must be caught and charged. Thinly disguised atheism and neopaganism are interlopers in liberated church circles. They have engaged in the theft of church property. The stolen property must be reclaimed and the thieves brought to justice.

To point this out means raising the issue of heresy. But in the "liberated" church circles of oldline denominations heresy simply does not exist. After centuries of struggle against recurrent heresies, Christians have found a quick way of overcoming heresy: they have banished the concept altogether. With absolute relativism holding sway, there is not only no concept of heresy, but no way even to raise the question of where the boundaries of legitimate Christian belief lie.

This is like trying to have a baseball game with no rules, no umpire, and no connection with historic baseball. Only we continue to insist on calling it baseball because a game by the name of baseball is what most people still want to see played.

By "liberated" church circles I refer to the sexual experimenters, the compulsive planners of others' lives, the canonical text disfigurers, and ultrafeminists (as distinguished from the great company of godly Christian women who are found at many different points along the scale of feminist reflection). The liberated characteristically understand themselves to be free from oppressive, traditional constraints of all sorts and shapes. "Liberated" is not a term applied from outside, but a term they frequently apply to themselves. By liberated they usually imply: doctrinally imaginative, liturgically experimental, disciplinarily nonjudgmental, politically correct, muticulturally tolerant, morally broad-minded, ethically situationist, and above all sexually permissive.

The intellectual ethos I am describing is not liberal in the classic sense of that word, but intolerant and uncharitable when it comes to traditionalists of any sort, all of whom are capriciously bundled under the dismissive label of 'fundamentalists

Have a read of Gresham Machen's common sense thesis drawn from an observation of the New Testament and church history:

a large part of the New Testament is polemic; the enunciation of evangelical truth was occasioned by the errors which had arisen in the churches...At the present time, when the opponents of the gospel are almost in control of our churches, the slightest avoidance of the defense of the gospel is just sheer unfaithfulness to the Lord.

There have been previous great crises in the history of the Church, crises almost comparable to this. One appeared in the second century, when the very life of Christendom was threatened by the Gnostics. Another came in the Middle Ages when the gospel of God's grace seemed forgotten.

Email ThisBlogThis!Share to TwitterShare to FacebookShare to Pinterest
Labels: bookks

Who was the writer who wrote this:
"A church that cannot experience heresy probably doesn't have any commitments, any identity, any character. The possibility of heresy is simply the negative expression of a church's having a confession of faith."?

Todd, are you talking about us Anglicans again.

We have no heresies in our midst. Fortunately, we got rid of our Confessions a long time ago. We've matured beyond those old things.

McGrath has it all wrong.

The writer in question is Timothy Lull. For the life of me I can't remember where I took down that quote from. It was in my Sept. 06 archive but I had forgotten to give the reference.