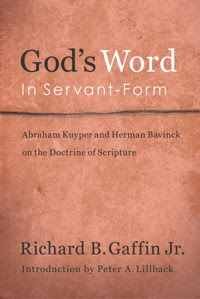 God's Word in Servant Form: Abraham Kuyper and Herman Bavinck on the Doctrine of Scripture by Richard Gaffin

This book is due out soon. Chapter 1 is available here.

The book carries the following endorsements:

". . . urgently needed to respond to a resurgence of historical nonsense. . . careful with his primary sources, avoids claiming too much, and sets a standard for evenhanded historical theology on this question that deserves to be the norm and not the exception."
-D. A. Carson, Trinity Evangelical Divinity School

". . . can only have a positive impact on the present generation's thinking about both the character of Scripture and proper theological reflection."
-Moises Silva

". . . Gaffin mines these stalwarts of the Reformed tradition for wisdom and insight in the inspiration and inerrancy of Scripture. . . a must-read for pastors, students, theologians, and laymen alike!"
-Sean Lucas

"Dr. Gaffin shows that Abraham Kuyper and Herman Bavinck believed in organic inspiration and also in an errorless Bible because of its ultimate divine authorship. . . "
-Ric Canada