A Son on the throne forever 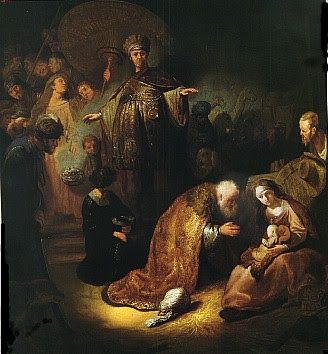 Before this scene could be played on the stage there had to be a script and a cast.

You said, "I have made a covenant with my chosen one,
I have sworn to David my servant,

'I will establish your line forever
and make your throne firm through all generations.' "

I will also appoint him my firstborn,
the most exalted of the kings of the earth.
I will maintain my love to him forever,
and my covenant with him will never fail.

I will establish his line forever,
his throne as long as the heavens endure.

In Matthew 2 it is not just any descendant of David whose birth troubles Herod and Jerusalem, but the birth of the Christ, the one born king of the Jews. How futile Herod's attempts are to destroy the one who would, by covenant promise, reign forever. Even though it appears absurd to oppose God and to fight against his king that is precisely what darkened hearts think they can do...and get away with (Psalm 2).

The script set down in the Old Testament not only spoke of his eternal reign but also of the supporting cast, the nations who would bow down and serve him. Psalm 72:5, 8-11, 15, 17 sets this down for the actors:

He will rule from sea to sea
and from the River to the ends of the earth.

The desert tribes will bow before him
and his enemies will lick the dust.

The kings of Tarshish and of distant shores
will bring tribute to him;
the kings of Sheba and Seba
will present him gifts.

All kings will bow down to him
and all nations will serve him.

Long may he live!
May gold from Sheba be given him.
May people ever pray for him
and bless him all day long.

May his name endure forever;
may it continue as long as the sun.
All nations will be blessed through him,
and they will call him blessed.

Right on cue the Magi arrive. The cameras are rolling and the production is a faithful rendition of what the Author and Director planned from eternity and scripted in salvation history.

Glory be to God that his Son is the hope of the nations and the King of all the earth. Blessed are all who take refuge in him!
Posted by Martin Downes at 8:52 AM