The tragic regress of heresy 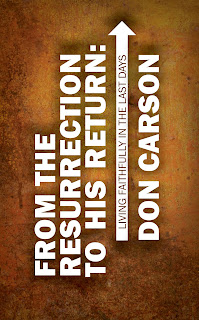 Here's a snippet from Don Carson taken from his new Christian Focus title From the Resurrection to His Return (35% discount available on UK orders from 18-19th March, details here).

The church is usually not too badly troubled by teachers who are, from the beginning outside the framework of confessional Christianity, teachers who are saying all kinds of things that Christians view as foolish, dangerous, or simply false – because they’re recognised as moving in another circle, they’re bringing another set of assumptions.

By contrast, if you find someone who has been a public teacher of Christianity for some time and who then gradually moves away from the centre of the faith, it sometimes takes a while to discern the nature of the drift.

When the first people to notice begin to wave a red flag, others say, ‘Oh, come on, you’re being much too critical. After all, we trust this person; he’s been such a huge help to us.’ It might take a very long time before many people clearly see how serious this
drift is.

Such teachers, then, are traitors.

They have turned their backs on what they once taught and defended, and so they have become treacherous.

It is not uncommon for such people to become rash.

They become impetuous in the sense that they do not think through the long-term eff ects of the stances that they are now adopting.

They become conceited, far too impressed by their own new-found opinions and deeply persuaded that the people whom they have left behind are narrow-minded and bigoted.

With egos the size of small planets, they become unwilling to think through things out of a confessional heritage anymore; they are too busy telling everybody else how wrong
they are.

But where is God in such behaviour? It is tragic to find unambiguous examples of people who are ‘lovers of pleasure rather than lovers of God’.