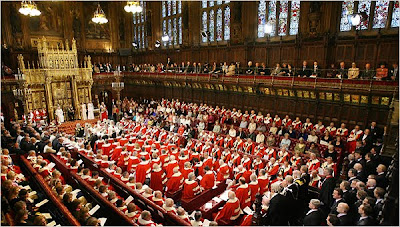 The following was sent to me by the North West Partnership:

Last night (2nd March 2010) the House of Lords voted to change the law on Civil Partnerships, allowing them to be performed in Churches and/or with religious language.

The amendment, which was introduced by Lord Alli, an openly homosexual Peer, and backed by a number of liberal Bishops, effectively removes one of the final distinctions between Marriage and Civil Partnerships—introduced just five years ago as being purely secular in nature.

The amendment was voted through at 11pm, by 95 votes to 21—an extraordinarily low number for such an important matter—and was hailed as a breakthrough by homosexual activists.

In January 2010, the Government had resisted Lord Alli’s amendment, reassuring the public that it was ‘not a workable solution to this issue’. However, in an unexpected move, the government suddenly allowed its Peers a free vote on the issue. The Conservative Party and Liberal Democrats also gave its Peers a free vote.

Ironically, the amendment was advanced as an issue of religious freedom, with some religious organisations voicing their desire to hold Civil Partnership ceremonies.

However, homosexual activists have previously made it clear that any change in the law would only be a step towards forcing churches to perform civil partnerships.

For example, Ben Summerskill, Head of Stonewall, recently said: “Right now, faiths shouldn’t be forced to hold civil partnerships, although in ten or 20 years, that may change.”

“What took place last night is nothing short of outrageous and all who care about democracy should be alarmed at the proceedings. At the end of January, Baroness Royall for the Government stated that: ‘Any change can therefore be brought */only/* after proper and careful consideration of these issues.’

“Was this statement deliberately deceitful, or do the Government believe that last night’s debate constituted the ‘proper and careful consideration’ of the issues? The amendment was debated for less than an hour and was voted through literally at the eleventh hour, taking everybody by surprise. To have such a significant change in the law—a change to another piece of legislation no less—take place at the end of the Equality Bill’s passing, without any real debate or consultation, and at such an hour that most Peers were not even in the House, is a disgrace and a clear manipulation of the system.

“We will be calling on the Government to resist these changes, for the good of our democracy as well as for the protection of marriage.”

It is not the first time that constitutional irregularities have been used to force through law that significantly favours homosexual activists.

In 2006 Lord Alli introduced amendments to the Equality Bill 2005/6 at the very last moment, which led to the creation of the Sexual Orientation Regulations 2007.

These highly controversial regulations were passed through on a take it or leave it basis, with no debate at all in the House of Commons and amongst other things have led to the closing of Catholic adoption agencies.
Posted by Martin Downes at 12:54 PM