The Covenant of Works, the Fall, and the Welsh Calvinistic Methodists 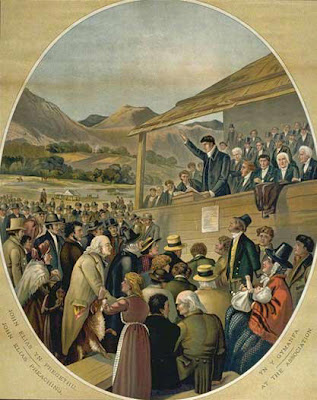 Here are some extracts from the Welsh Calvinistic Methodist Confession of Faith (1823). You can read the whole thing here:

8. Of Man in his original state of Innocence.

The Lord God formed the first man, Adam, as to his body, of the dust of the ground, and breathed into his nostrils the breath of life; and man became a living soul, spiritual, rational, and immortal. He and in him all his offspring were made upright, in the image and after the likeness of God, endowed with knowledge, holiness, and righteousness.

The law of God was implanted as an instinct in his heart, and he was both endowed with power, and placed in advantageous circumstances, to keep it; yet capable of changing and falling. He stood only so long as he kept the commandment. He was perfectly happy, at peace with God, and enjoying his fellowship, and had dominion over all creatures on earth.

9. Of the Covenant of Works.

It pleased God to condescend to enter into covenant with the first man, Adam, adapted to his state of innocence, and consisting of a command, a threat, and a promise. The special command, which was the pledge of his obedience, was not to eat the fruit of the forbidden tree; the threat was that, if he ate thereof, he should die.

The nature of the command and the threat leads us to infer that this covenant contained a promise also of life and happiness, if man obeyed the command, in contradistinction to the death threatened as the penalty of disobedience. The law of our nature was all contained in this covenant, so that it was impossible to transgress the special command of the covenant without transgressing, at the same time, the entire law of our nature. Adam stood, in this covenant, not only as a natural root of all his offspring, but also as their covenant head and representative; so that their happiness or misery, as well as his own, depended upon his obedience or disobedience.

10. Of the Fall of Man and Original Sin.

Though man, when God made the covenant of works with him, had power to obey and fulfill the conditions of the covenant, yet he disobeyed God and broke the covenant.

The serpent deceived Eve, and Adam hearkened unto the voice of his wife and wilfully transgressed the commandment of his Creator by eating of the forbidden fruit; and by this means he broke God's covenant, forfeited his right to the promised life, became subject to the threatened death, lost his original uprightness and fellowship with God, and became totally corrupt in soul and body.

As he was the root and representative of mankind, his first sin is imputed to them, and his corruption flows into all his seed, who spring from him by natural generation. In consequence of this natural corruption, mankind are become incapable of goodness, yea, opposed to all goodness and prone to all evil; and from this depraved nature springs all actual sin. Original sin and all actual sins, in soul or body, are transgressions of God's holy law, bring the sinner under a curse, and expose him to the wrath of God, and to spiritual, temporal, and eternal misery.