Greg Beale on the exegetical basis for inerrancy 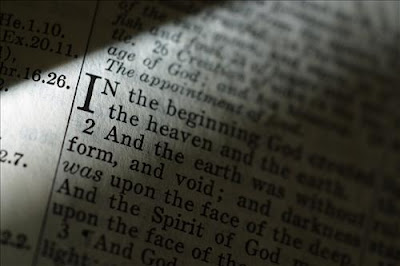 Beale argued that John has already made this argument and drawn this conclusion for us in the book of Revelation. The gist of Beale’s argument went like this:

Revelation 3:14 presents Jesus identifying himself as “the Amen, the faithful and true witness.”

Later in Revelation an angel commands John to “Write,” and then the angel declares to John, “These are the true words of God” (Rev 19:9).

Later still in Revelation the one “who was seated on the throne” commands John, “Write this down, for these words are faithful and true” (Rev 21:5).

And again we read in Revelation 22:6 that an angel says to John, “These words are faithful and true.”

From this string of verses, Beale argued that John has presented to his audience the very logic of inerrancy:

Email ThisBlogThis!Share to TwitterShare to FacebookShare to Pinterest
Labels: Tinkering with Scripture

1. John was fallible; he could have made mistakes in understanding what he heard and/or in communicating it.

2. Those 'These are the true words of God' passages, in context, refer to short statements within the Revelation -- they do not refer to *every* word written.

Sorry skipper but I'm not happy with anonymous comments.

It is not just John, but Jesus that affirms the Scripture; He talks of Noah, Moses and other prophets. He speaks what is clearly His revelation (Sermon on the Mount). He doesn't give the beatitudes and then says, or at least that's my opinion.

At the end of Matthew 5, Matthew writes that all there were amazed that He (Jesus) spoke with authority not like the scribes.

Dear Martin,
I don't agree with Beale here. In the laudable attempt to show that belief in the faithfulness of God, expressed in a trustworthy revelation of himself, is an exegetical conclusion, the argument falls short of showing inerrancy to be an inductive, exegetical conclusion.

That the words John has written are faithful and true is established, but a lot of work needs to be done in discerning the answers to questions like: "In what sense are they faithful and true?" The answer might be "true in the sense of scientifically and historiographically correct" - then again it might be "true in the sense of the Hebrew word 'emet': trustworthy and leading to life". Given the fact that John was soaked in the Old Testament Scriptures, living in the 1st Century, I find the first alternative to be a foreign theological abstraction imposed on the Bible from the outside.

Please forgive the bluntness of my comment here - I feel strongly that the stipulation of inerrancy is unhelpful for several reasons:

1. It distracts away from the explicit aims of Scripture (making wise for salvation in Christ Jesus 2Tim3; correction, warning and encouragement for God's people)
2. It encourages forced harmonisation where Scripture itself wants us to hear the polyphony (in the gospels for instance)
3. It clouds the bible's insistance on true human agency (2Pet2:21) even when under God's sovereignty
4. Unsolved technical discrepancies ("contradictions") in the bible are raised to the level of an attack upon the sovereign wisdom of God, creating unnecessary trials for believers.
5. It encourages the application of categories foreign to the bible (scientific, historiographical truth) in a way such that the original contexts of Scripture are obscured and distorted (in contexts where historiographical correctness is not essential - to the communication of truth - note that here there's a big difference between say, the audience of Genesis and the audience of Luke).

I can imagine there is a way to hold to the idea of inerrancy in a way which lets the bible itself answer the question "in what sense is this text faithful and true?". In this sense "inerrancy" encourages us to find the fundamental harmony of Scripture in its polyphony. But I fear that "inerrant" is not a helpful term - the term "trustworthy" does all of the good things inerrancy wants to do without encouraging the bad.

Thanks for posting a comment. I'm not going to be able to reply to this before the middle of next week. Hope that's OK.

While I understand your concern with the term inerrant, the short of it is our Lord Christ Jesus, held the OT as inerrant as I've already detailed.

It is through the door of "doctrine divides" that heresy has crept into the church. It is not enough that the scriptures are "trustworthy" they must be inerrant or they are not scripture.

The so-called contradictions always turn up as not so contradictory when all scripture is interpreted as a whole.

Dear Mullins,
I believe the Lord Jesus believed the OT was true. To assume that our cultural definition of "true" is valid, without taking time to study the biblical definition, seems to me to be too short - not really taking the bible seriously enough.

I agree with you that the "doctrine divides" mantra is often lazy thinking. However the assumption that all correct doctrine only offends those on the "left-wing" is also lazy thinking - Paul's doctrinal clarity sometimes offended those on the "right-wing" (2 Tim 2:14; 1 Tim 6:3f).

Perhaps in your church, stopping short of calling the bible inerrant would divide - but if the bible teaches something different to the doctrine of the church, then the doctrine has to be reformed, and division taken into account.

I submit that this sentence: "they must be inerrant or they are not scripture" is a culturally fashioned axiom which can't be demonstrated from the bible.

Could you please explain how we have changed the meaning of "True"? True is true, in other words true is not false.

Jesus as you admit, held scripture to be not false therefore it is true. True is not a cultural concept it is a logical one.

Again though if our God is inerrant and he wrote our scripture then it too must be inerrant or then He is not. I don't see how this doctrine divides anyone unless they do not believe in God.

True and False are binary opposites in formal logic. But promises, stories and explanations are true or false in terms of what is being purposefully communicated.

Indeed, politicians can mislead by speaking logically true statements. God is not a politician. His words are truth.

Idealistic philosophy blurs the difference between truthfulness and the logically "true" creating a brittle orthodoxy or extreme scepticism.

Look, the argument is not if what God has revealed in His word is true but is it inerrant, or in other words, is there any error in scripture.

Truthfulness is clearly defined as you stated: non-falsehood. What I was arguing was not that the important question is one of true/false but of inerrant/errant.

If that is anyone's version of God, I think it is a different God from the Christian God. That's ok by me just say you're not talking about the Christian God or Scripture. (btw, I'm not saying you are saying this)

"1. John was fallible; he could have made mistakes in understanding what he heard and/or in communicating it.

2. Those 'These are the true words of God' passages, in context, refer to short statements within the Revelation -- they do not refer to *every* word written."

How do you know that?

We may not be far apart but the fact is that "inerrancy" has been extended by some people to include scientific and historical inerrancy by the modernist standards of Science and Historography.

I believe that all scripture comes from God's mouth - for instance there is much in Genesis and Revelation (and many texts between) which can not be true by such standards but which are absolutely true by the standards of what God chose to communicate.

Too many inerrantists extend their concept of inerrancy to what they think scripture "obviously" means. For instance, I believe in an old creation and some form of evolution (though not driven by natural selection alone). On the other hand I believe every word in Genesis has come to us just as God intended.

Many inerrantists would see those last two sentences as mutually contradictory.

Inerrancy is therefore a fairly useless category except as a "shibboleth".