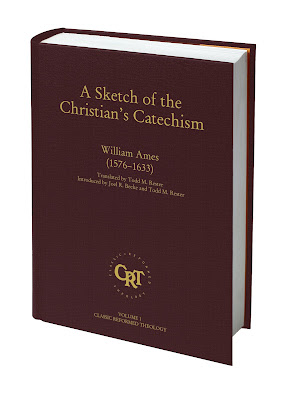 Scott Clark gives us the heads up on a new series of texts being produced by Reformation Heritage Books. The series is called Classic Reformed Theology and the first volume is a series of sermons on the Heidelberg Catechism by William Ames. The series will provide critical English editions of key texts from the vitally important era of Reformed orthodoxy.

Richard Muller says of this series:

"This is an important project that promises to make available in good editions and translations a series of eminent works of Reformed theology from the era of orthodoxy. These volumes will offer students of the Reformed tradition an invaluable resource and will hopefully stimulate interest in the highly refined and carefully defined thought of an era that was formative of the Reformed faith and that assured its intellectual and spiritual vitality for later generations."

You can have a look at the book here. It will be available, appropriately, on 31st October.

The introduction to the series, by Scott Clark, is available here.

Here is Scott on the importance of this series:

"We call this series Classic Reformed Theology because, by definition, a period is classical when it defines an approach to a discipline. During the period of Protestant orthodoxy, Reformed theology reached its highest degree of definition and precision. It was in this period when the most important Reformed confessions were formed, and when the Reformed churches took the form they have today.

There are at least three reasons why classic Reformed theology ought to be studied and thus why this series of critical English translations should exist. First, Reformed orthodoxy forms the intellectual background of modern theology. Second, Reformed orthodoxy merits attention by those who identify with the Reformed confessions because it is their heritage and thus shapes their theology, piety, and practice. Third, contemporary scholarship has shown that it must be regarded as a vital intellectual and spiritual movement, and thus an important subject for continued study."

Posted by Martin Downes at 6:00 AM