Doctrine matters: If you tolerate this then your children will be next 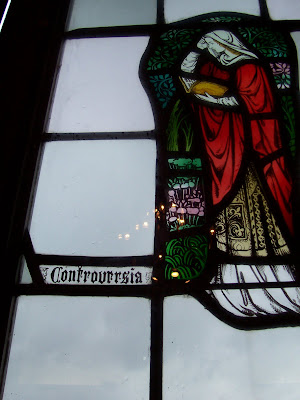 Sadly the idea that doctrine is somehow bad, unhelpful, the cause of pride, an evangelistic impediment, not necessary for spiritual growth, divisive etc. etc. has more traction and plausibility than is warranted. Of course people who downplay doctrine are not really anti-doctrine at all, just anti a particular form of doctrine that they don't like (like God's sovereignty, or penal substitution).

If all that was at stake here was the matter of correctness the situation would not be so dire. But when people deliberately set out to diminish the importance of sound doctrine, and encourage others to do the same, they are a clear present danger to the Church. And they are acutely shortsighted.

The following words from David Calhoun (Princeton Seminary Volume 2, p. 398) should not only be read careful but weighed:

"When the Presbyterian church rejected the Old Princeton message and chose institutional unity above doctrinal integrity, it undermined not only its own history but also its witness.

Opening the doors to the influences of a secularizing society, it became more and more difficult for the church to sustain its Christianity and to pass it on to the following generations. Most of the baby boomers surveyed in a recent study of Presbyterians who have left the church said they knew little about what their parents believed--a finding that led the authors to conclude that in passing on their faith to the next generation, parents have to teach their children about doctrine.

A second conclusion from the study was that children of the church were more likely to maintain their Christian identity if they were taught that Christianity is the only way of salvation.

In the words of the sociologists themselves, "the single best predictor of church participation turned out to be belief--orthodox Christian belief, especially the teaching that a person can be saved only through Jesus Christ."

That conclusion should make large segments of evangelicalism, and other contemporary movements, think again.
Posted by Martin Downes at 4:36 PM